It’s an undoable chore to compare Iranian islands to one another and come up with a list of top five Iranian islands when all of them are entirely sui generis in their own lush eye-catching way. It’s hard to strike up a conversation with an Iranian with them not pointing out one of the country’s fascinating and mythical islands, some of which being as old as ancient Persian cities and being inhabited for as long as the written history of Persia dates back. They will tell you about all the beautiful landscapes, mysterious tribes, strategic geographical locations, marine life, and undiscovered properties of these islands that are spread mostly across the Persian Gulf, not far away from the Strait of Hormuz.

Surprisingly, there’s just one northern island in the Caspian Sea, which is more like a loose peninsula, that unexpectedly has dedicated some pages to itself in Persia’s history book. This almost-an-island was the retreating destination of Shah Mohammad Khwarazm in the 18th century who fled to from the ravaging onslaught of the Mongol armies and left the defense of the land to his son and soon-to-be king, Jalal ad-Din Mingburnu.

We are going to kick-start our list of top five Iranian islands with an island that has been overshadowed by other Iranian islands but with enough unbelievable sites and history to hold for itself.

Qeshm is a sun-scorched island close to the crystal-clear waters of the Persian Gulf that interestingly enough is quite popular among Iranian road-trippers, despite being completely cut-off from the mainland. Situated between the opening of the Persian Gulf and the Strait of Hormuz, Qeshm, the largest of Iranian islands, has caught enormous attention to itself throughout Persia’s history. Also known as Abarkawan, a name given to it in the Safavid era, the first mentions of its existence in Persian history clarified the geographical importance of this island that grandly benefited empires’ trade systems and the exchange of cultures with overseas lands. It was a navigational center between old Persia, China, and Africa, which led to the island flourishing.

Also check out: 10 Things to See and Do in Qeshm and Hormuz

Even today, Iranian people see the island as one of the best trade hubs in the country to buy reasonably-priced goods and to get better deals, and thus, you’ll see a lot of Iranian going on a shopping spree in their trip to this lovely island. Despite the economic gains, a piece of land in the sea must have more to offer in terms of promising historical and social features to be entitled a spot in our list of top five Iranian islands, and Qeshm has all of it indeed.

As mentioned above, lots of Iranian road-trippers have been to Qeshm at least one time or more in their around-the-country travels, and the reason is so apparent; easy and convenient maritime transportation. Qeshm can be the last, or the first stop in a very stunning road-trip route throughout Iran, which starts from the northern shores of the Caspian Sea and continues down to the shores of Bandar, or the exact way around. From the shores of the Persian Gulf, a small boat can transport people and cars to the island, making a trip to Qeshm even more desirable since it covers both land trips and sea voyages. Our advice is to see around the island in your car because it gives you more options in terms of tourist attractions to check out and saves you a lot of precious time.

After arriving at Qeshm island, multiple natural and man-made tourism side are at your fingertips to explore and enjoy. An 8000 hectares natural reserves of Hara forest, the historic port of Bandar Laft in the vicinity of the forest, numerous caves such as Namakdan Salt cave, which is the longest in the world, and the abandoned Portuguese fortress don’t even take up a third of the island’s sites. To top this all off, the mesmerizing of Valley of Stars, with deep roots in locals’ beliefs and stories, can be the best possible end to a scenic journey. With its name driven from ancient tales of falling stars to the land shaping pillars and creating caves, it comes as no shock that even Iran’s astronomy groups and society pick out this place for their annual educational tours and bask in the surrounding soul-trembling stony landscapes and dark sky in the nighttime. 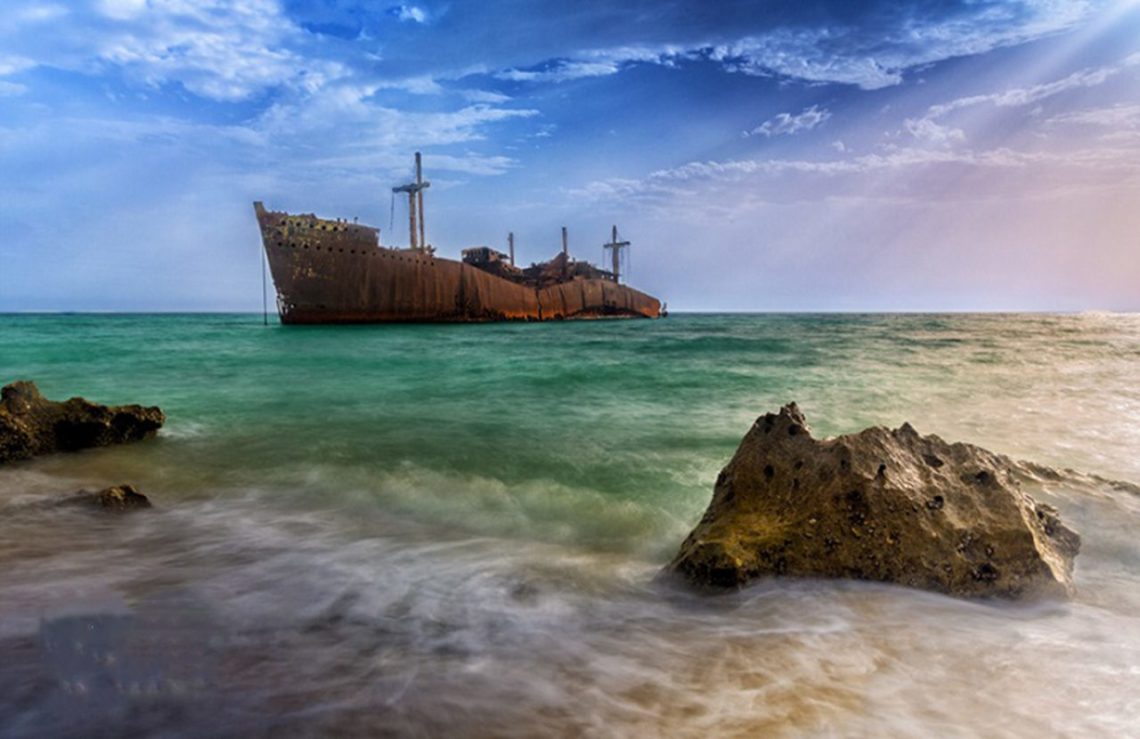 Talking about being unknown and mysterious, nothing about this island is unknown, at least to Iranian people. If you’ve read our piece “Sun, Sea, and Sand: Kish, a Dreamy Island in Iran,” then you’re already familiar with its dramatic past and how it got forgotten in history books. Nonetheless, more recent governmental undertakings have restored this beautiful island’s previous glory and have put it back on every in-Iran traveler’s radar, domestic or international alike, once again. At the moment, it’s hard to find an Iranian who hasn’t been to Kish!

Another free-trade zone island close to the strategic strait of Hormuz, Kish island has put irreplaceable memories in every Iranian’s mind, or other globe-trotters invested in going on an excursion on this visually-blessed island. The reason behind it is that Kish has always been a place for more social freedom, public shows, and massive entertaining programs economically accessible to almost all layers of Iran’s society. In other words, it has always been the party-island for everybody, something like Hawai. Here, people have fun taking a dip in crystal-clear water or enjoy exalting marine sports. Kish has been the central hub for trade ships that brought with themselves new culture and commodities to the region.

Also check out: Do I need a visa to travel to Iran?

Despite being a show stage for western culture with grand multi-deck Western knockoff shopping centers exploding with cost-effective free-trade zone’s imported goods, Kish island is also packed with mind-blowing natural landscapes and man-made scenic sites – a double feature for tourists. There are quite of few exciting places to go through, but we’ll keep it short for you.

First, a stranded ghostly Greek ship in the shallow northern coastline of the island that has been long since it last moved is the best spot for couples to spend a romantic evening as the sun reluctantly sets behind the massive ruin of once glorious Greek ship.
The underground city of Kish puts up a fight with the Greek ship to find out which one can attract more visitors. This subterranean city, which covers an area of 10,000 square meters, was constructed to collect, purify, and store water for the inhabitants of the island. As the island is situated in a region with an arid climate, this was essential for their survival.

Also check out: The Top 6 Luxury Hotels in Kish 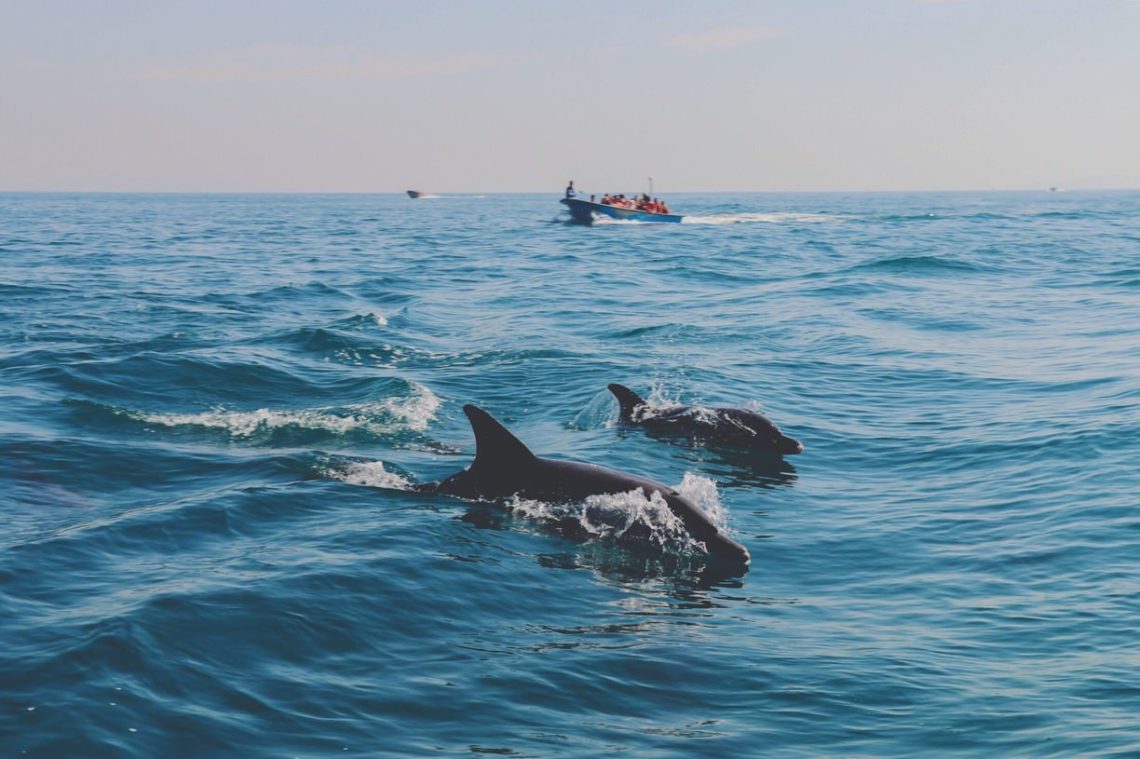 We will give you all you need to know about this less-recognized and underrated island in Iran. It’s in the southern part of Qeshm island in the Persian Gulf. Aside from the natural beauty of this wondrous Iranian island, there are tons of fun activities you can engage in while having fun on Hengam island. Probably the most entertaining thing to do during your stay on this island is to watch the precious Persian Gulf’s dolphins hop out of the crystal-clear waters of the sea and dive back beak-first into it; A rare sight, not to be found so easily in other islands. And even might fight an opportunity to swim with them.

Also check out: Your Guide to the Best Beaches in Iran

Keep in mind that this is not one of Dubai’s human-made aquarium and marine parks, and while that means no entry fee to watch the show, there’s the slightest possibility that no dolphins would be around to put on a natural display for you. To increase the chances of watching these beautiful, smart creatures, try to arrange your sea voyage to the island sometime in the morning and between October to May or just head out for a boat ride early in the morning after your situated on the island.

This piece of land in the middle of the Persian Gulf and Hormozgan province holds a couple more tourist attractions and essential features. As one of the top five Iranian islands, Hengam island is packed with wildlife. Some rare animals like the native Persian Gazelle, lizards, and Hawksbill sea turtle are the species that live on the island, same as crabs.

A memorable finish to your excursion on Hengam island can be a tour through the local bazaar and buying some traditional souvenirs for your family and friends. Handicrafts made of seashells and scallops stock the stalls and are hard to miss.

While Larak island manages to capture visitors’ hearts and souls, those aren’t the only things getting caught in the area, and lots of political drama news pops up when you search Larak’s name on the web. Nonetheless, Larak has much to offer, so we’re diving into its pivotal touristy spots.

Larak is bestowed with some profound features, Larak island is an untouched paradise with few inhabitants, most of them fishers, turning it the dream-spot for travelers seeking out the tranquility of vastly empty beaches. Also, the second half of the Persian year if the best time to visit the unspoiled beaches of this island since the warm weather of the island milds down the cold of winter and take a rest at the beach more rewarding. 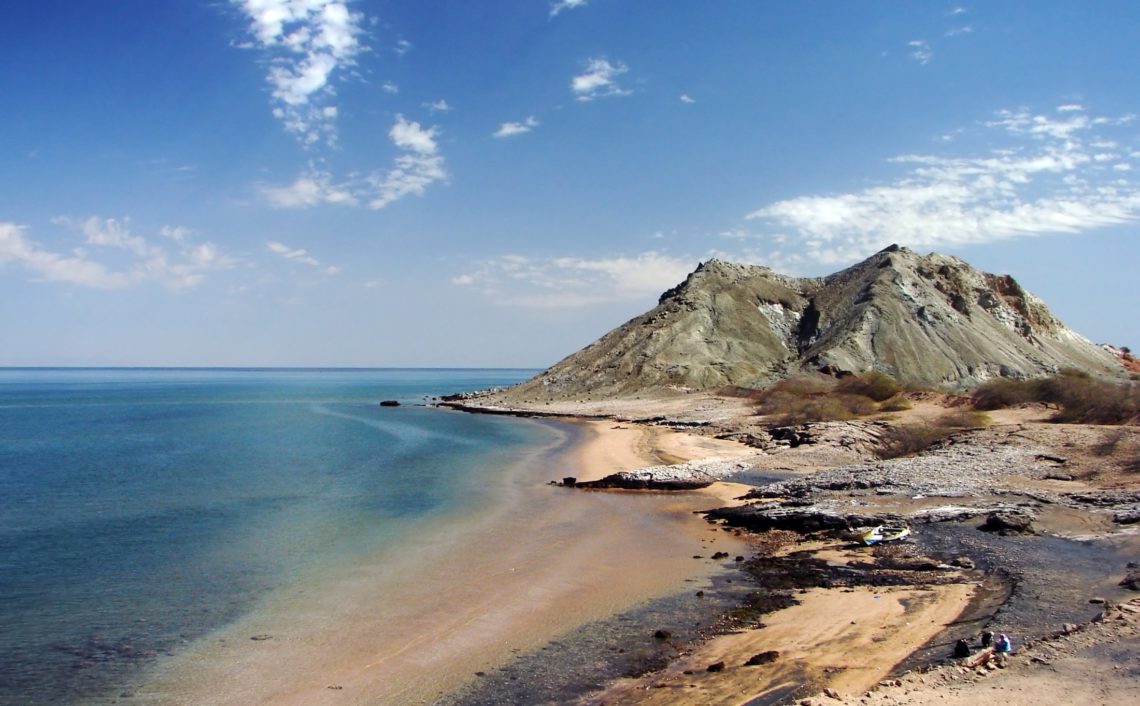 Hormuz island or the rainbow island of Iran always inspires awe out of unaware local and international tourists. This beautiful isle on the west side of Qeshm island secures a spot in our list of top five islands in Iran owing to its remarkable vivid sand mountains. This island is gifted with so many natural coastal and mountain landscapes and man-made settings that a one-day excursion trip across the island won’t just cut it. 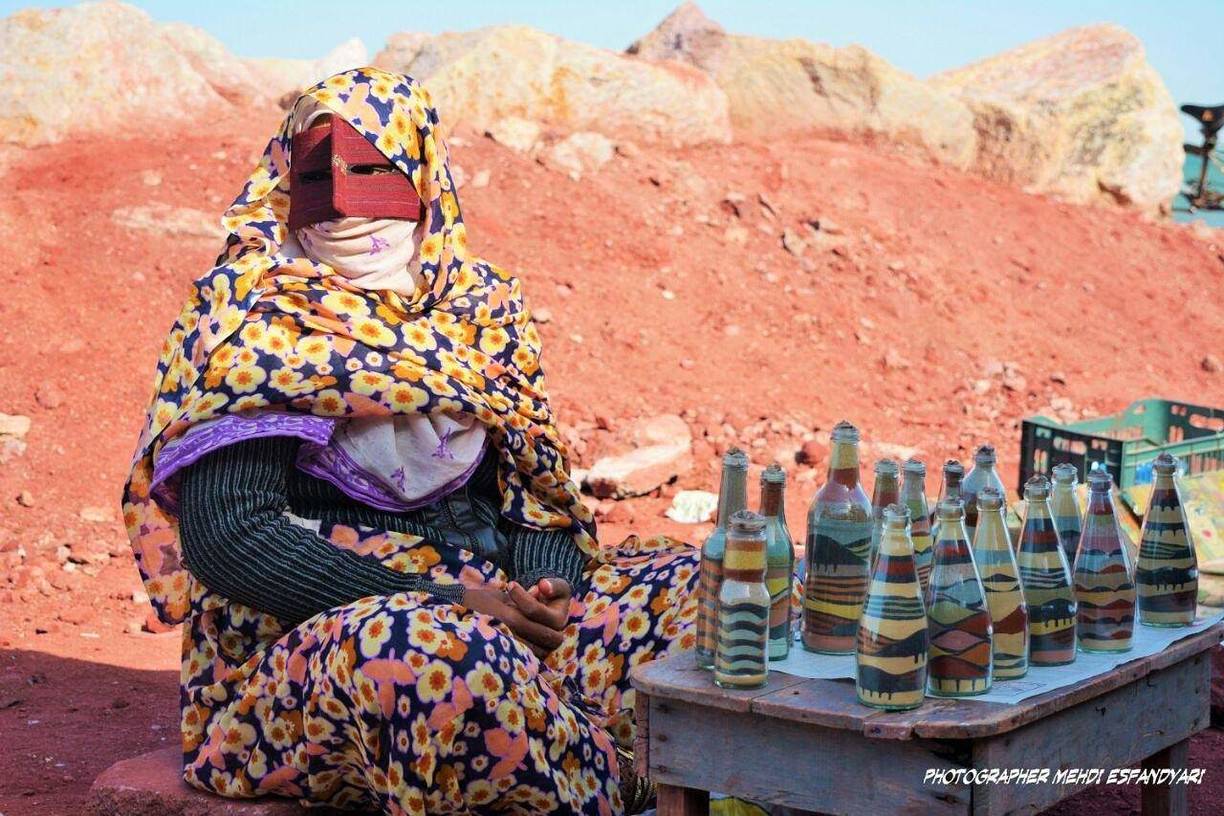 The depth of the sea on Hormuz Island is enough for massive oil tankers to exit from the Persian Gulf quickly. The Salty Island of Hormuz is like an oyster in the blue waters of the Persian Gulf. A beautiful coastal road surrounds the island, so you will see many natural attractions such as colorful sandy roads while you are walking or biking on this road. In addition to the natural landscapes, many historical sites such as the Portuguese Castle, Khezr-e Nabi, Bazaar, house of saffron, the school, and remnants of the Palace of Bibigol and Bibisurat. By walking and laying on the shores of Hormuz Island, you will see the crabs, sharks, native and migratory birds, and turtles that give you unworldly excitement and pleasure. You can spend the night at the beach and enjoy the Phytoplankton that illuminates the beach. Hormuz Island is an excellent choice for those who are interested in recreational activities such as swimming and water sports. The rainbow mountains on the island are alone enough for Hormuz to secure a place in our top five Iranian islands.

How many islands does Iran have?

Does Iran have beaches?

Yes, You can find great beaches in the north and south of Iran.

What is the biggest island in Iran?

Qeshm is the largest island in Iran. 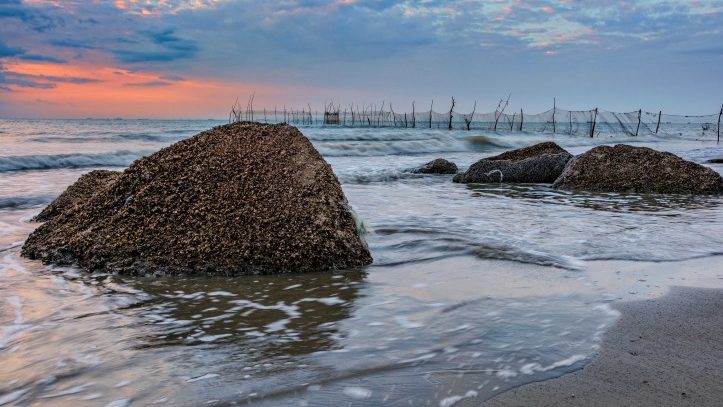 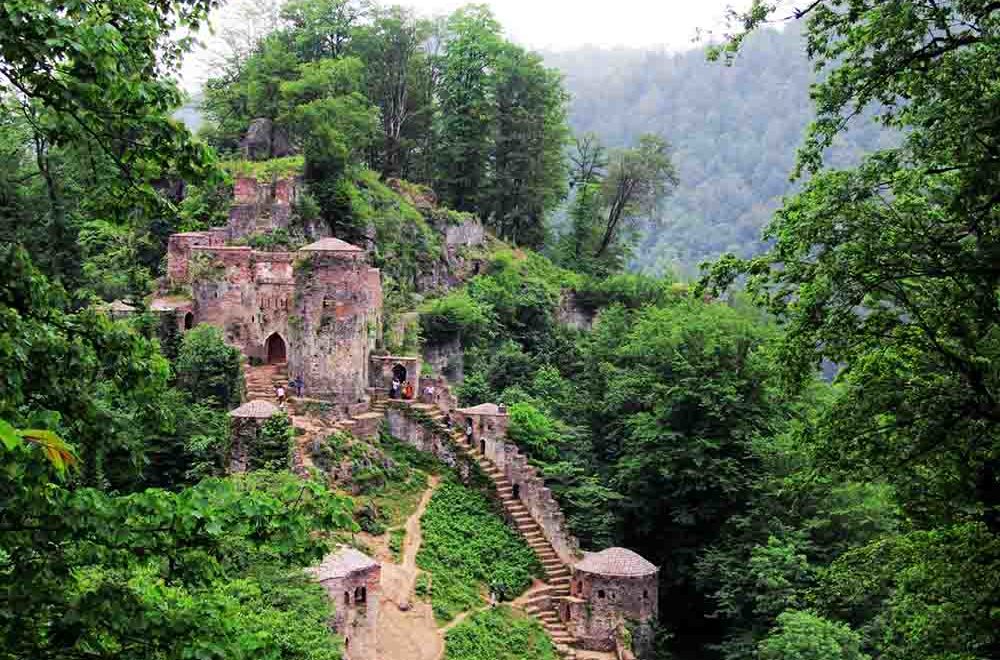 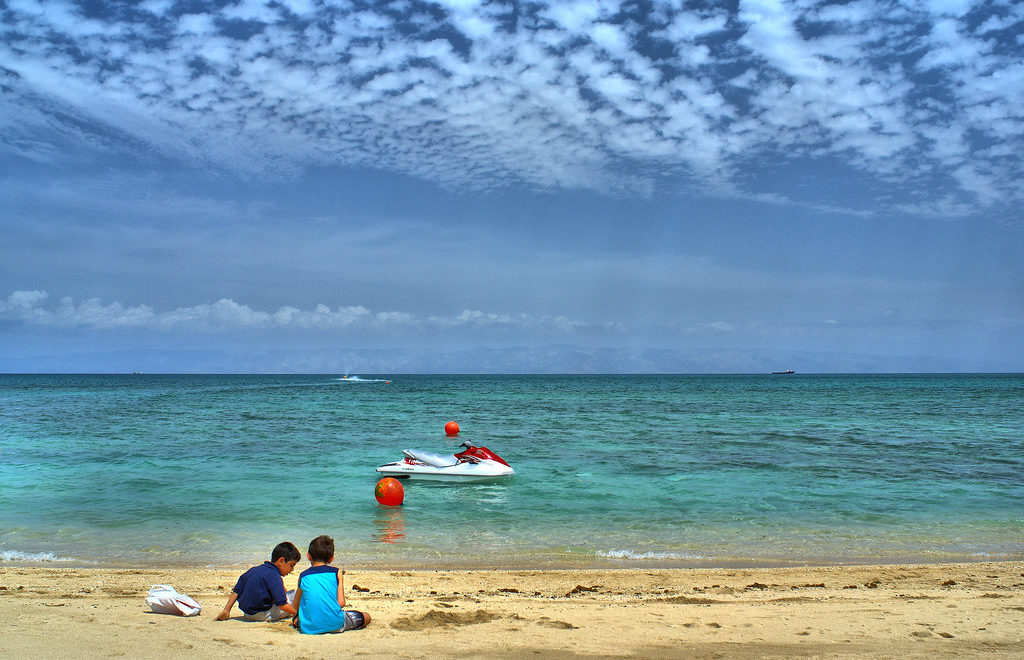