They’ve been invaded, leveled to the ground, built up back from ashes, used as shelters, exploited as staging points for religious crusades and movements, torn down again, and again received a renovation. The story of mosques in Iran is a never-ending loop of full-scale destruction, objecting congregations, governmental reforms, in-deep royal family life, and probably the most eminent of all, the true landscape of Iranian architecture, both before and after Islam.

If the city of Cairo in Egypt is labeled “the City of a Thousand Minarets”, then it’s safe to call Iran “the Country of Tens of Thousands Minarets” because mosques can be found in any city, town, and even small villages across a Shia-dominant Muslim country. Mosques in Iran feel more like eye candies, however. As the country moves more hastily toward modernism and the new Millennials break free from the traditional religious beliefs shadowing the society and express themselves in the way they see fit, the gravity of going to a mosque for prayers dies away in their eyes.

Although not receiving the love that they used to get, even the newly-constructed mosques in Iran still carry the heritage of their glorious ancestors. From mosques (Masjids) with multi-colored minarets and tile-works to ones without any minarets surrounded with gardens and small pools, these magnificent buildings embody the social life, economic status, political principles, and the great respect for religion among old Persians, showing us how much they were dedicated to their God.

Our story of mosques in Iran takes you along a route through some of the renowned tourist destinations in Iran – which are not surprisingly cramped with historical mosques and worship houses – boosting up the value of these cities even higher. 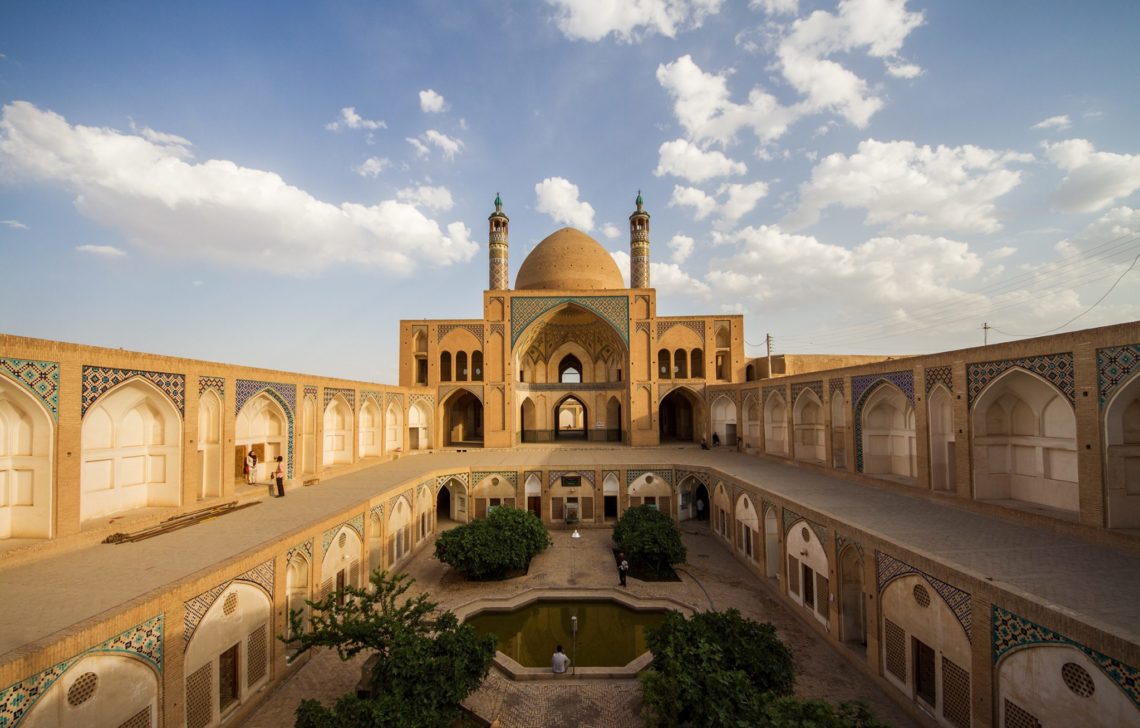 Our Story of mosques in Iran starts with the globally famous Agha Bozorg Mosque in Kashan, a souvenir from the 19th century. The main dome visually cuts the entire oasis into half in the perfect balance; another flawless example of geometrically-balanced Persian architecture. This mosque in Kashan amazes travelers and sightseers on different levels, literally.

Agha Bozorg mosque pushes you off to a free-fall of amazement and astonishment and what place better to let this feeling sink in than under the bonsai-like trees of the tiny gardens in the lively courtyard, all sitting around a geometrically-designed Persian pool, humbly supplying unlimited shadow and heartwarming breezes to visitors in warmer times.

You may also read: Traditional hotels in Kashan

Still doesn’t feel special enough? Then head under the dome and try putting your head down on the ground to watch the ceiling. What you will see is an arch of exquisite turquoise-hued tiles laid on honeycomb and precise geometrical patterns on the higher sections and fascinating Arabic calligraphy cloaking the mud-brick lower parts of the dome. The view is intriguing and the sensation will penetrate your skin and soul. Don’t forget to bring your cameras with you, though. Long shots of the architecturally balanced mosque, enchanting main dome, and hallways of arches with two minarets in the background are quite popular among photographers.

You may also read: A Brief Guide to Kashan 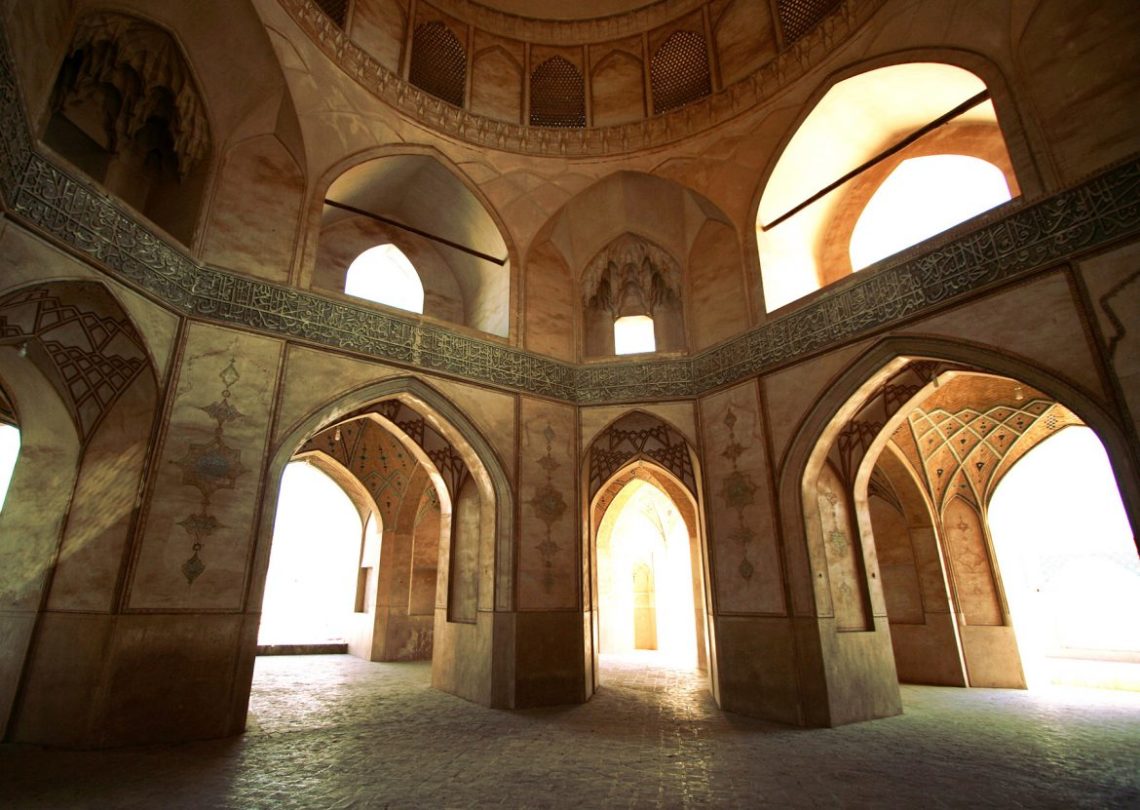 Agha Bozorg mosque is not all about the looks and there’s more to this temple than meets the eyes. Like many of its kind, this mosque in Iran had been built for educational purposes and chambers of a historical school can be seen on two arms connecting to the main dome from opposite sides. The chambers are beautifully designed with doorways that led the scholars straight into the sunken courtyard for a bit of fresh air. Also, for the convenience of the elderly and any passerby, two platforms were placed on the opposite side of the main dome where the breeze coming from the mosque’s legendary Persian wind-catchers cools them down and gets their spirits high to continue on their journey.

You can book Kashan hotels easily through 1stQuest.

The hidden underground chambers of this mud-brick oasis in the middle of the desert city of Kashan serve entirely different purposes. They served as a hub for gatherings where devout would come around to engage in religious ceremonies.

Where you’re on a tight schedule or not, Agha Bozorg Mosque in Kashan is a must-see destination quite worth every second you invest in exploring it. 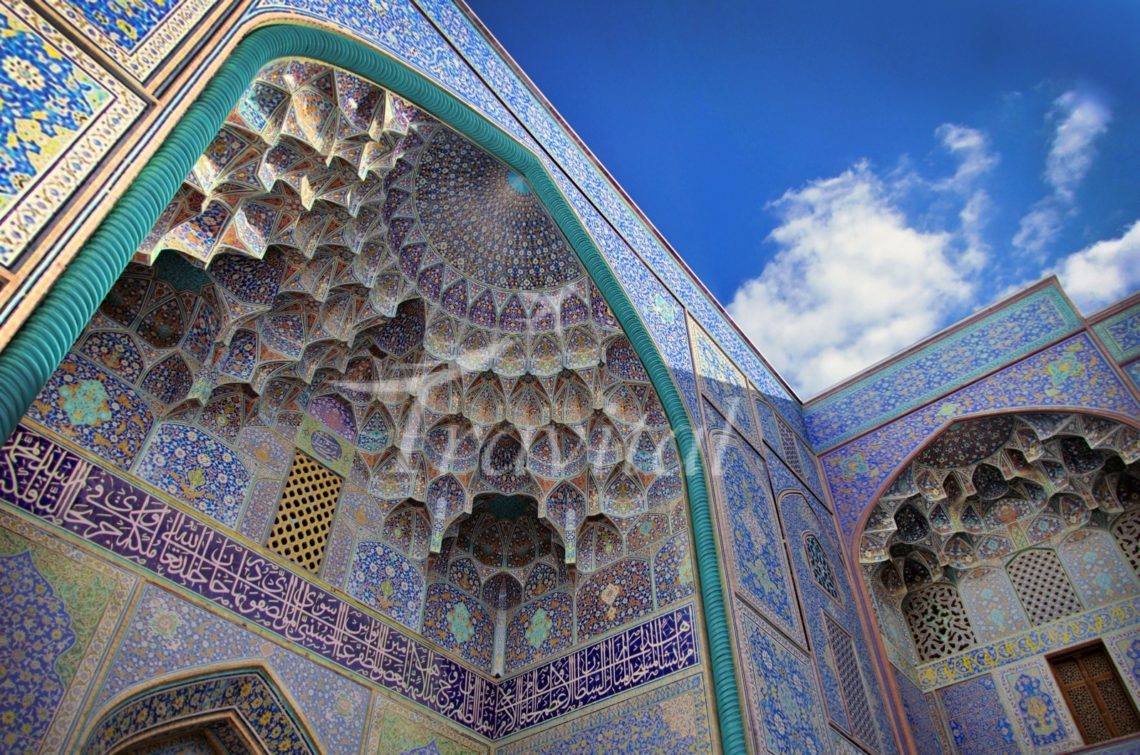 If having no plans beforehand is your thing and roaming around a thousand-years old historical city that the UNESCO keeps close tabs on is your agenda, then you’re definitely in for a treat during your stay in Isfahan. Most of the alleys in the historical sections of Isfahan are paved with stone, guiding tourists through mud-brick historical buildings, churches, schools, and grand mosques. One of these mosques is the Sheikh Lotfollah mosque or Masjid-e Sheikh Lotfollah, an undeniable mosque in Iran history.

You may also read: 5 Days in Isfahan: The Perfect Isfahan Itinerary

The story of mosques in Iran resumes in the middle of Isfahan. On the eastern wing of Naqsh-e Jahan, the most famous tourist destination in Isfahan Sheikh Lotfollah mosque was raised by the order of the puissant founder and the most powerful man in the history of Safavid empire, Shah Abbas or Abbas the Great; A private mosque for the Shah and his family.

You may also read: Architectural treasures of Isfahan

This put a lot of pressure on the builders and architects to come up with a design fitting for a Shah and away from the public eyes. Therefore, they decided to build the mosque without minarets and dug a mythical hidden underground passage-way that Shah and his family could travel through to the mosque, undetected by the public. Although the architectures gave it all in their power to keep the mosque a secret, they weren’t really successful. The urge to insert their art and over-the-top touch into the body of this marvelous structure got the best of them. They ended up creating a masterpiece that couldn’t be hidden from the public for long and to this day, manages to dazzle everyone and inspire awe. 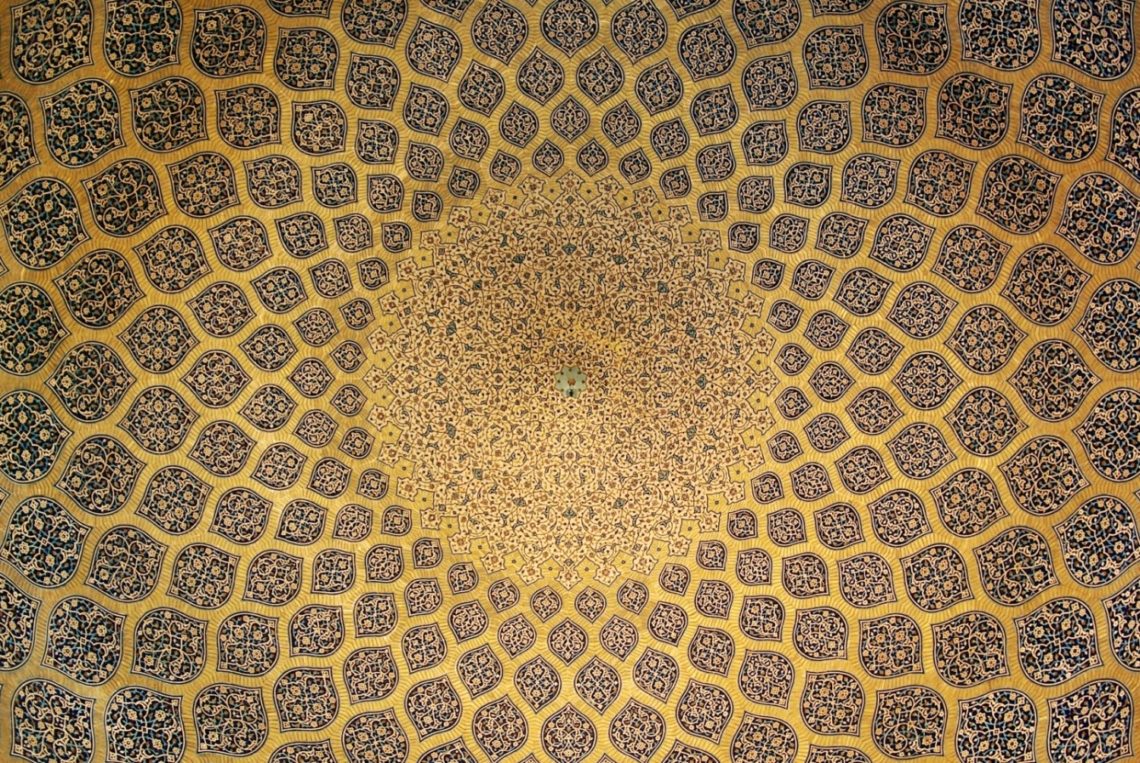 The flawless symmetrical design of the mosque’s portal can be recognized as soon as you walk up this marvel. The muqarnas of this impressive treasure steals glazes with faience mosaic. Polychrome tiles cover the rest of the mosque exterior in an aesthetic blue and yellow colors. While modest on the outside, except for the muqarnas in the portal, Sheikh Lotfollah’s interiors shine of luxury worthy of a Shah. Internally, the walls and dome are encrusted with cream or pink-hued tiles instead of glittering blue. This paradox bought it the name “the most Unusual Iranian Religious Structure.”

You can book Isfahan hotels easily through 1stQuest. 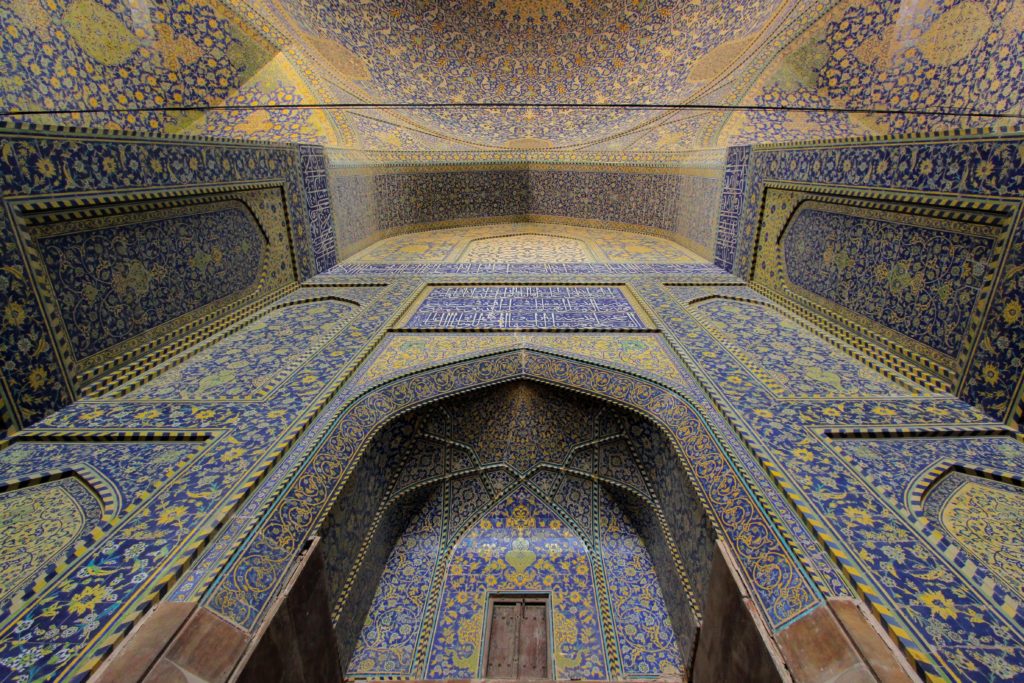 Another fascinating visual aspect of this mosque in Iran is its dome. To build a circular dome on top of a square prayer room, Iranian architectures invented a technique called Chahartaqi (something like pendentives and squinches technique in the old Roman architecture) to transform a square plan into a circular dome by means of four large squinches that extend to ground level and are paired on four sides of the square by four large arches.

Only a few steps away from Sheikh Lotfollah mosque, seats one of the most – if not the most – important mosques in Iran and in Isfahan – the Royal Mosque or as older Iranian might tell you, the Shah Mosque. Internationally famous for its fabulous look, Royal Mosque is the infinite masterwork of Iranian history and architecture. Located at the head of Naqsh-e Jahan, or the Square of Persia, Imam Mosque taunts every visitor who steps foot into the well-known square.

You may also read: Traditional hotels in Isfahan

This massive sized religious complex neighbors some urban districts in the city and it can be accessed by different municipal routes; thus, numerous entrance portals had to be implanted for easier access. Knowing this fact, we want to take you on an enigmatic tour through the decorative entrance portal facing the Imam Square.

The charm of the portal bewitches visitors who come by it. This much-photographed entrance gate is bedecked head-to-toe with gold and silver Moarraq Kari ornaments – inlays of floral motifs, geometrical designs or calligraphies by the very best artists of the era.

You may also read: The Best 3-days Itinerary of Isfahan

On the top-side of the gate, muqarnas of exquisite Persian tile-work arch over entrants in a diligent fashion, packed with honeycomb-patterned and geometrically-arrayed painted tiles. The design of other entrances follows the trend of their Imam Square’s counterpart, decoration-wise. Together, they make up for the simplicity of the earth-color of the exterior walls that hug the surrounding social-hubs.

As they walk into the interior ambiance continues, new sights of the domes and the main courtyard start to challenge the beauty of the portal in the mind of any beholder. 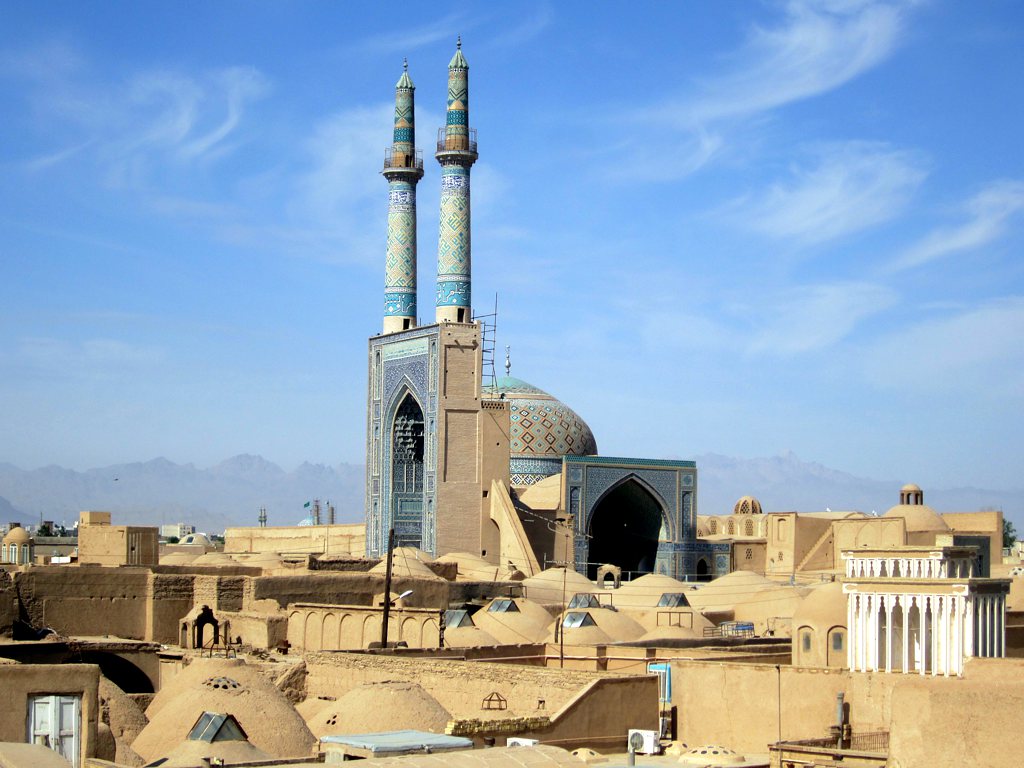 Not much can be said to describe the mythical mud-brick city of Yazd, the adobe wonder of our age. Yazd is filled with astonishing historical sites in the heart of the central Iranian desert, Dasht-e Kavir. The oldest and the most valuable brick city in the world has more than just fantastic eye-catching wind-catchers and unmatched historical houses to show off but we’re not discussing those in this piece; the story of Iranian mosques in this city fascinates us.

You may also read: a Travel guide to Yazd

The Jameh Mosque of Yazd, originally designed and built back in the Sassanid era, is the main congregational mosque in the city. Located deep in the old texture of the city and built on top of a former Zoroastrian fire temple, Jameh Mosque plays an undeniable role in both the Islamic and Zoroastrianism history.

The two lofty turquoise-shaded opulent minarets of Masjid Jameh in Yazd tower over the surrounding historic structures emitting glamour and pride. These minarets penetrate 52 meters into the sky, each one 8 meters thick. Another unparalleled aesthetic feature of the mosque is its magnificent dome. A double-shelled mud-brick dome with subtle flower patterns on the outside. Interiorly, however, the main iwan (rectangular space), hugged by an arcaded courtyard, is embellished with masterful mosaic tiles and also arabesque and plant patterns and girih tiles. 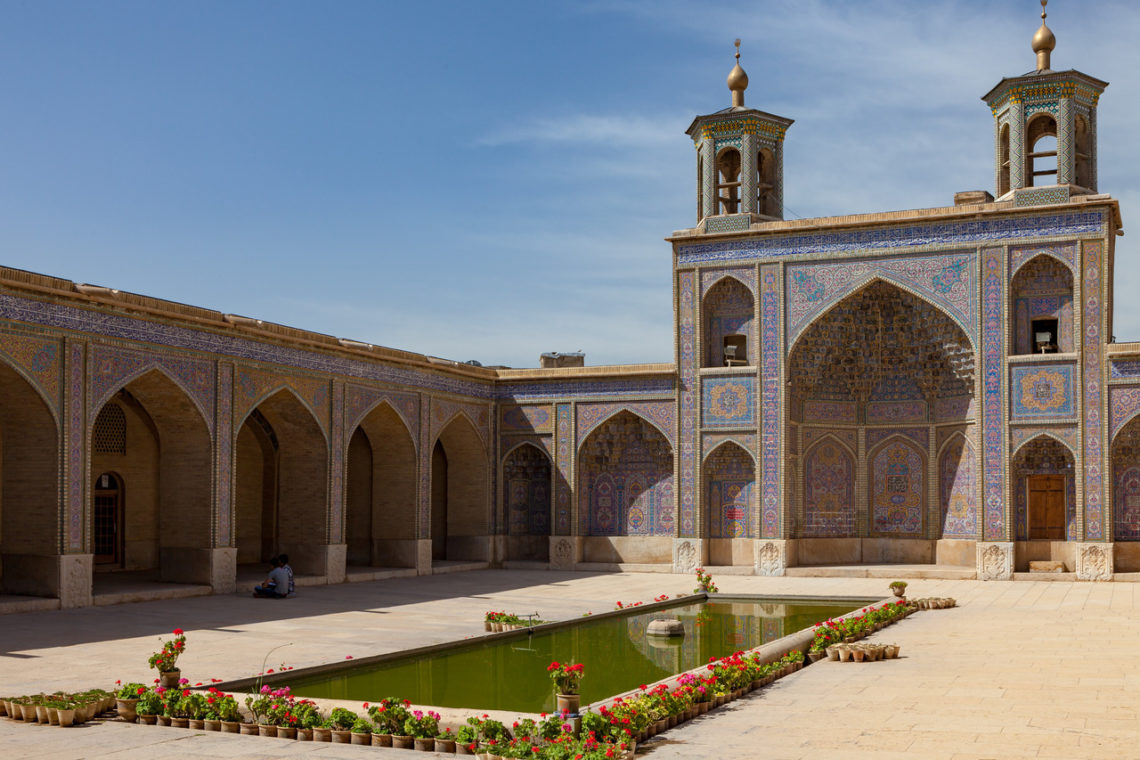 We kept the best for the last. Standing tall since the era of Qajar, one of the most beautiful mosques in Iran is the Nasir-Al-Mulk mosque, the most alluring and elegant of them all. Other than particularly fine muqarnas work in the small outer portal in the northern iwan, the arcaded courtyard with a central rectangular pool greatly resembles another house of God in Shiraz, the Shah Cheragh mosque.

You may also read: Seven days itinerary in Shiraz

Nevertheless, don’t let the rather simple outer looks throw you off and bring you down since the beauty truly rests inside the Nasir-Al-Mulk mosque. The inner bedchambers on the western and eastern sides of the mosque bring forth the true beauty of Shiraz culture, art, and craftsmanship.

From the start of the day, the eastern bedchamber filled with Persian carpets on the floor and exquisite tile-work on its 12 carved pillars and arched ceiling shine divinely with a kaleidoscope of patterned flecks of light bent through dazzling stained glasses fronting the room. This unworldly journey reaches its climax as the noon approaches and more sunlight races through the stained glasses hypnotize the curious tourists and make it impossible for them not to take a picture.

You can book Shiraz hotels easily through 1stQuest.

Nasir-Al-Mulk mosque, also known as the “Pink Mosque”, was built between 1876 and 1888. It has been given this name because of the plethora of pink-colored tiles shading the ceiling. Due to sturdy construction and the use of flexible wood as struts this marvelous building has survived multiple natural disasters.