Iran in Depth, Tip to the Trip, True Stories

Before the history itself, they were the built for people to bath their selves in and enjoy the medical and spiritual features they had to offer, a hygienic hotspot if you will. The invention of Iranian Historical Bathhouses, which date back to the years before the Achaemenid dynasty and the Roman Empire, were tightly bound to the religious beliefs of Zoroastrianism and in consequence, the people. They believed that water was sacred and bathing and washing their selves in it would bring them closer to God.

While Iranian were proudly bathing themselves in hot steams and massive Iranian bathhouses, the very concept of a big underground salons built below the surface to fully utilize the water pressure difference from canals and aqueducts and with narrow corridors that stop the heat from getting out and to trap the vapor was a joking matter to many civilizations of that time. Even the western countries and empires didn’t have public places where everybody can wash and come out clean and healthy and if anybody cared about their health, they’d wash in the rivers.

As more and more people became aware of the benefits of taking a bath and the necessity of bathhouses, Iranian historical bathhouses, or Hammams, got flocked with large number of people coming from different parts of the city and gradually the Iranian historical bathhouses turned into a public gathering place for discussion, debate, and exchange of ideas. This, alongside religious spirituality of bathhouses, boosted up the importance of these partly holy places with visual aesthetics and of great architectural value. 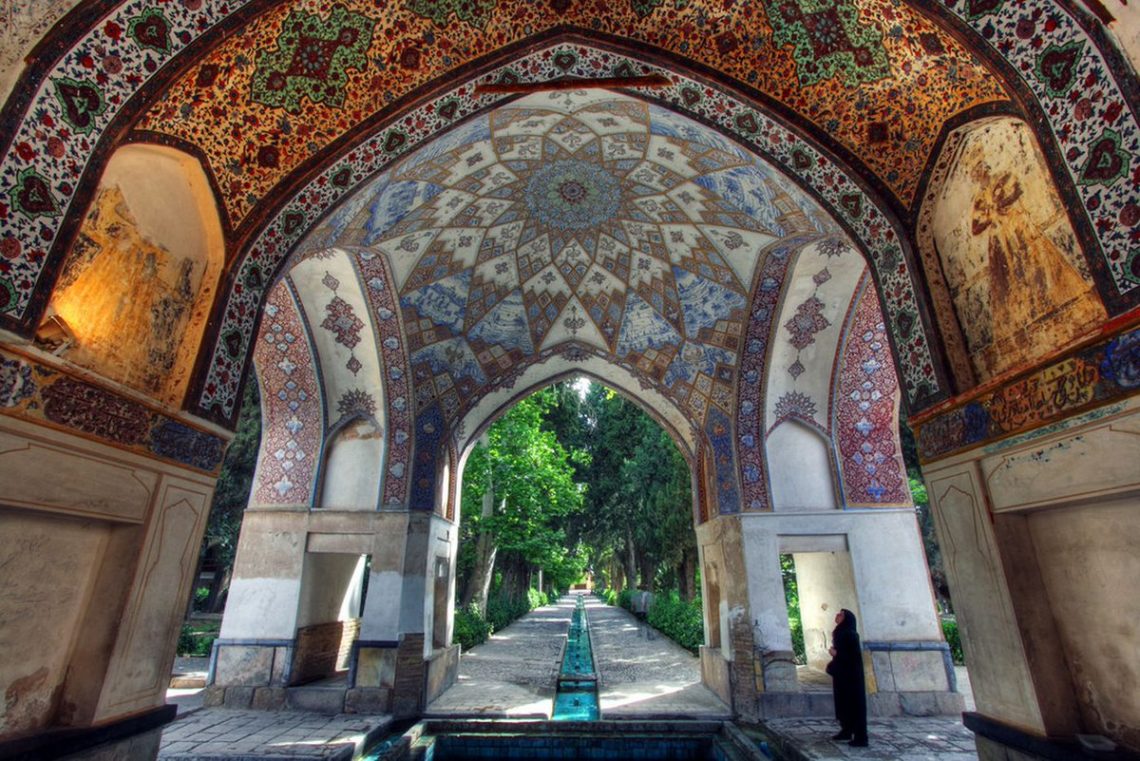 The bath of Fin or Hammam-e Fin probably is the most recognizable and famous one, both in Iran and in the world, since it’s on UNESCO World Heritage Site. Here is the assassination ground of the most loved and praised nationalist chancellor of Iran, Mirza Taqi Khan, also known as Amir Kabir, who was sentenced to death by the drunk Shah, Nasser-al Din Shah. The most noteworthy of Iranian historical bathhouses sits elegantly in the suburb of Fin, 9 kilometers southwest of central Kashan, in Isfahan province and only a two hours ride away from the capital- Tehran. Hammam-e Fin is a souvenir from Safavid Era and actually has a twin bath in the same area of Fin Garden. Both baths have a changing room (Sarbineh), and a hot chamber (Garm Khaneh), hot water pool (Khazineh) and fountain (Howz).

The fin bath is in great harmony with the garden that is packed with mesmerizing mini-fountains fixed inside of channels decorated with turquoise tiles and surrounded by evergreen trees that guide the crystal-clear water from natural springs throughout the mansion. Like many other Iranian historical bathhouses, specially-designed twisty walls and corridors in the different areas of the bath are charged with the responsibility of preventing the loss of heat and to avoid moisture penetration, these walls are coated with a mixture of iron, sand, and mortar.

Also check out: How to make traveling to Iran easier

The mannequins inside the building and the bath rebuild the painful seen after Shah’s executioner slashed Amir Kabir’s wrist and ended the life of a hero that still even till this day Iranian people grief over his death.

You can book Kashan hotels easily through 1stQuest. 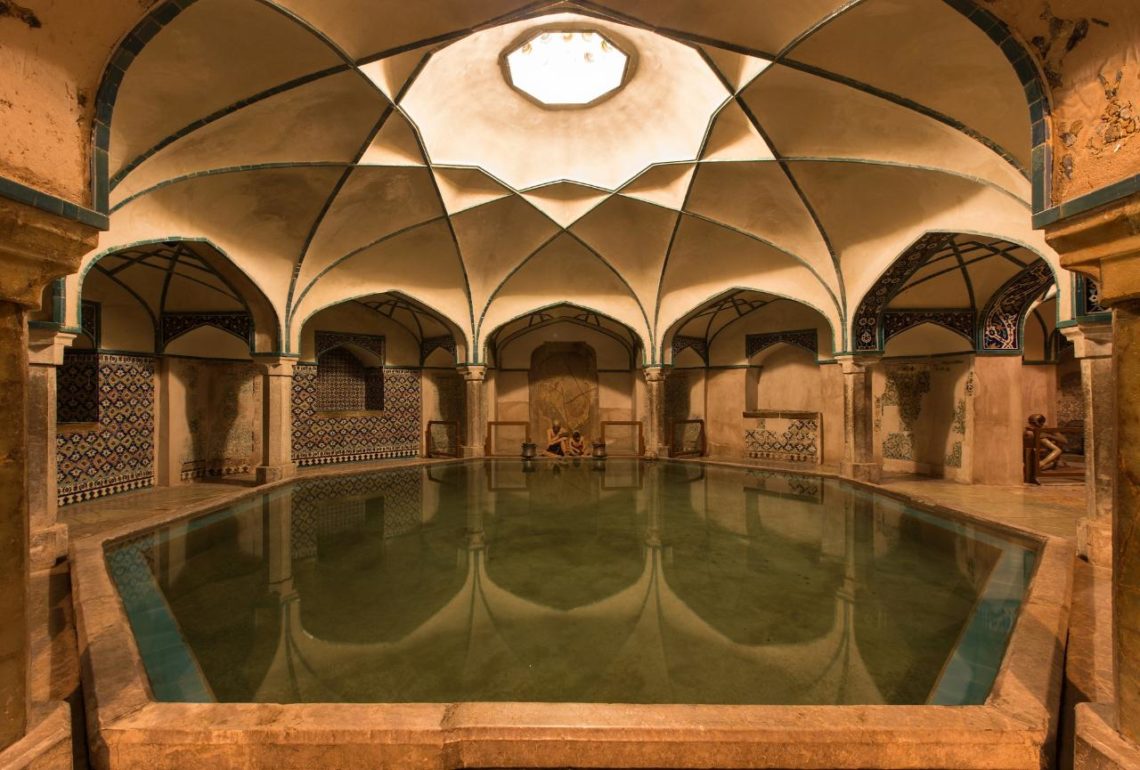 Another masterpiece of art, architecture, and history that resides in the form of a bathhouse. Like other Iranian historical bathhouses, Ganjali Khan bathhouse has faced a change in the application and has been repurposed into an anthropology museum back in 1971 where wax dummies display the way this traditional bathhouse worked and was operated by its operators.

Also check out: The best hotels in Kerman

Ganjali bathhouse is part of Ganjali Khan Complex in Kerman and yet another testimony to precious Iranian-Islamic architecture with wonderful handwork, aesthetic tile-work, unique stucco, masterfully-handled arches, and paintings that pat the eyes of any visitor. Same as Hammam-e Fin, Ganjali Khan bathhouse is a reminder of Safavid Era. It’s located in the center of the city, which makes it perfectly positioned for tourists, and it’s 64 meters in length and 30 meters in width at an area about 1380 sq.m and it holds two main chambers; a hot-chamber and a dressing room. This bathhouse was built back in 1631 and the water running through it comes from Shahr Abad Qanat. The complex also consists of a square, bazaar, bathhouse, mosque, Ab-Anbar (water reservoir), mint, and a monument which the bathhouse is positioned to the south of the square.

You can book Kerman hotels easily through 1stQuest.

Different Parts of The Bathhouse:

1- Sar Dar: The entrance the bath with beautiful paintings of the Safavid era.

2- Corridor: To save the heat.

3- Sarbine: Or the dressing room was usually octagonal, occasionally square.

6- Time stone: These stones show the time via sunlight.

7- Hakem Neshin: The most important person in the city took a shower in this isolated chamber. 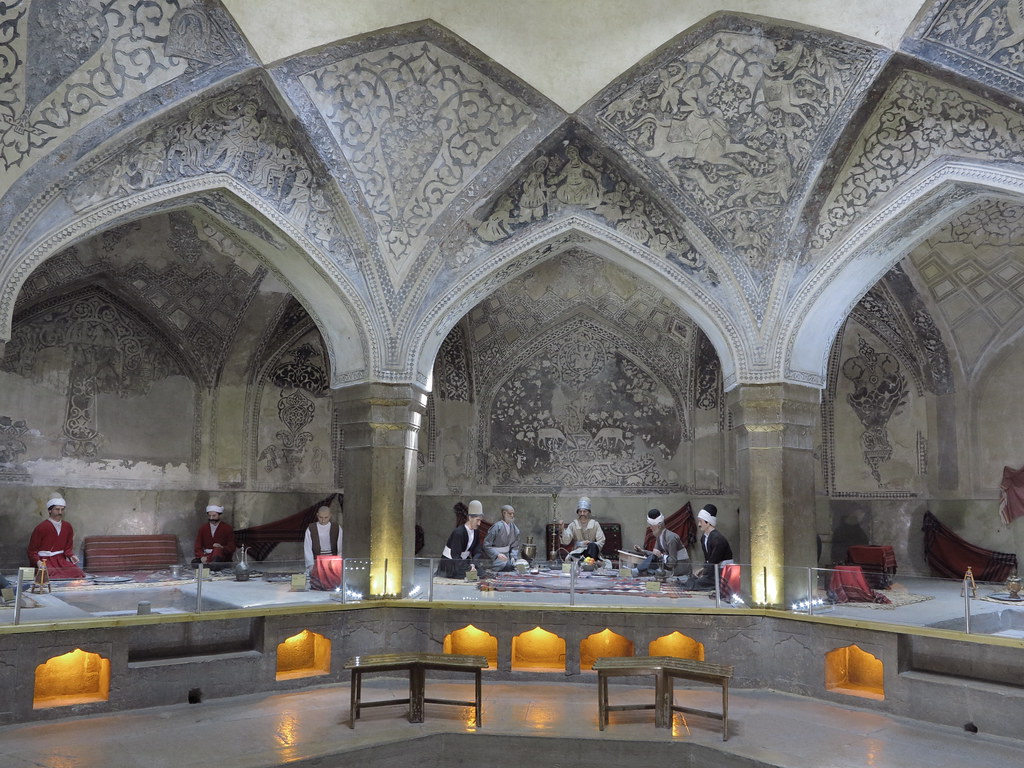 Located close to Bazaar Vakil in Shiraz, Hammam-e Vakil or Vakil bathhouse was constructed by the order of Karim Khan Zand, the founder of Zand dynasty. Exquisite plasterwork, sky-blue turquoise tiles alongside gold tiles, and vaulted central chamber all bring beauty to this very old yet very stable Iranian traditional bathhouse. As part of the royal district constructed in the old era, Vakil bath is neighbor to some very interesting tourist sites such as Arg of Karim Khan (Karim Khan Citadel), Vakil Bazaar, Vakil Mosque, and many more administrative buildings which only adds to the value of this Hammam. Same as many other Iranian historical bathhouses, Hammam-e Vakil is no more functional and serves as a museum to visitors who can see wax mannequins in shape of bath operators massaging customers or washing them.

You can book Shiraz hotels easily through 1stQuest.

Hammam-e Vakil had been built to the highest architectural standards of its time and uses the candy-twisting corridors and segmented chambers as an old method of keeping the interior ambiance hot and preventing the cold from coming in and giving the customers an unwanted chill and possibly a cold. The hot chamber (or Garm Khaneh) paved with stones under which is a narrow corridor through which heat weather and steam passed to heat the bath floor sooner. In the south of the bath, there is a reservoir with two great boilers to heat the water. Also, there is a marble pool in the middle of each alcove. Also, the dome of the Hammam is adorned with tiles that show some of Quran’s verses inscribed on them, all put together in a geometrically and beautiful order. 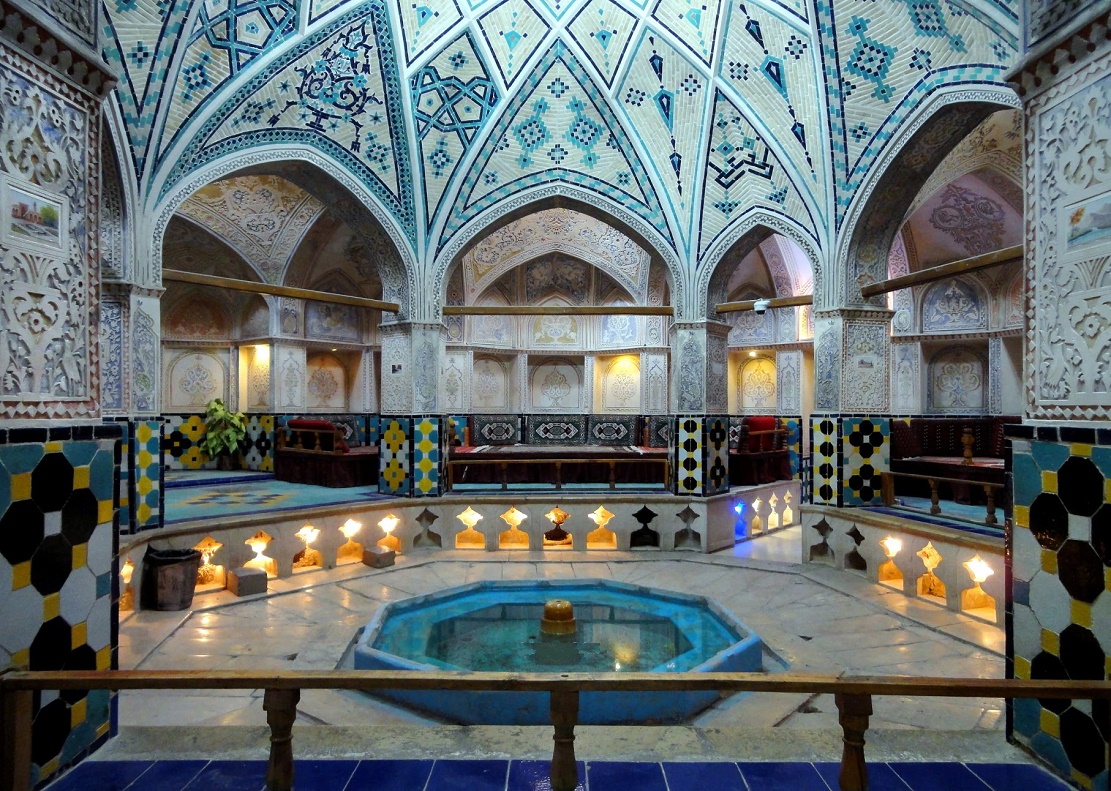 Another remembrance of Safavid era, Hammam-e Sultan Amir Ahmad, or Qasemi Bath, is located in the historical city of Kashan in Isfahan province. The main building of the bath consists of two parts; a dressing room (Sarbine) and a hot bathing room (Garm Khaneh). This is 500 years old bath and one of the oldest Iranian historical bathhouses named after Imamzadeh (descendants of the holy prophet Mohammad) Sultan Amir Ahmad, whose mausoleum is only a few minutes away.

Identical in design to other traditional Iranian bathhouses, twisty corridors form the inner space of the bathhouse to deny the heat of the bathhouse to fade away and to provide the maximum privacy for the people living inside the mansion. This masterwork of Islamic and Iranian art recently went through the process of a renovation and as a result, the interior walls lost their 17 layers of plaster only to reveal the legendary sarough, an ancient type of plaster and a combination of milk, egg white, soy flour, and lime which is said that is stronger than cement. Here, Visitors would have used the antechamber to disrobe and store their shoes (in the lit alcoves at floor level) and would have proceeded to the inner rooms for a scrub down. Bowls made of copper, used for its conductive properties, were used for heating the water and pipes channeled the water underground heating the floors.

This Hammam was built back in the 16th century but was heavily damaged during an earthquake in 1778, so the Qajari masters took it upon themselves to bring the bathhouse back to its previous glory and renovated the historic bathhouse. Turquoise and gold tiles, traditionally painted ceilings, patterns, and murals decorate the interior. The hallmark of the Hammam is the dome of gilded glass which not only used to provide light but was also the main distinctive feature of the bath. Today the bath acts as a tourist attraction, telling about the former luxurious life of the Persian sultans.