Iran deserts make up a huge chunk of any YouTube bit or tourism-related blog uploaded to the internet about the enigmatic socially-polarized Iran. This got us reviewing our blog stash and realizing we needed to pump up our game on “Iran deserts” and bring you a solid description of what awaits you in these god-forsaken baron dry-lands. So, bare with us through this piece as we take a more in-depth look at the subjects to fetch you a complete “Guide to Iran deserts” that educates you on the elementary material of these two mysterious landmarks, Dasht-e Kavir and Kavir-e Loot.

Don’t even start to plan your trip if you have no idea when’s the best time to do so. Otherwise, this could be the last thing you do in your life. Beginning of Persian fall and winter afterward, to the early weeks of Nowruz (Farvardin, or March in western calendars) cool down the blazing sun-rays and make the sand-lands bearable, and even enjoyable. For those of you who travel by yourself or small groups, meaning you need to camp at night, you should not test out the patience of mother nature in these parts at any other time; it has taken away some voyagers in the past.

Those more interested in traveling in huge crowds and getting to know the locals while the excitement of the Sahra (the literal Persian word for desert) slowly takes over them, under the supervision of a qualified Iranian tour guide, they’re in for a treat. Pre-arranged daily or weekly Kavir Gardi (desert wandering) tours pick up desert-admirers from different cities all across the country and entertain them over few days or just one-day excursions with exciting activities and scheduled drops on wondrous man-made and natural desert sites.

You can book the best Iran tour packages online through 1stQuest 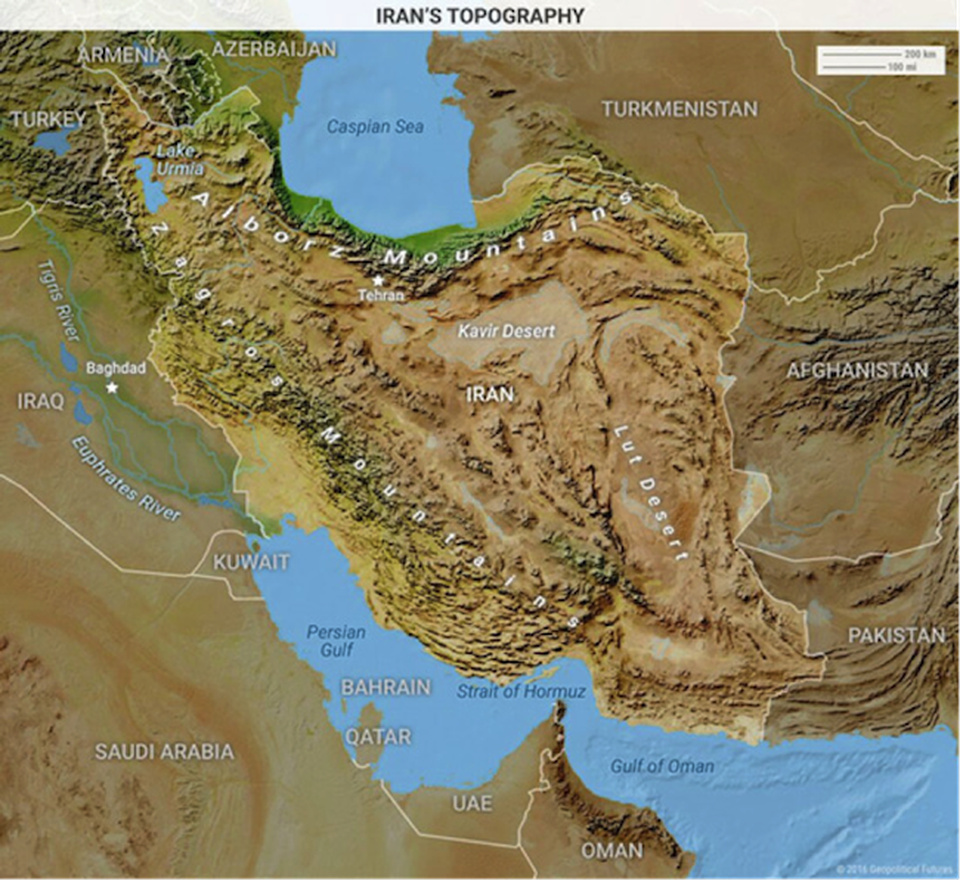 Nearly a clean 20% of the country burns under the scorching sun unmercifully boiling every living or dead thing in its reach. Throughout 400 thousand square kilometers, the central dry-lands stretch from the outskirts of Tehran, the very own capital, in the north to the diamond shores of the Persian Gulf in the far south. From the east, the subtropical borders start where the awe-inspiring green hills of Kermanshah end to the eastern and southeastern borders with Afghanistan, all across Sistan Baluchestan province and a big chunk of Kerman province.

You might be surprised that the hottest place ever recorded on earth, in our time, is located in Dasht-e Loot, in the desert plateau of Kerman, with the mind-burning temperature of 70.7 degrees; a force not to reckon with which has turned the landmark into an uninhabitable zone. This pops up the question of “Things to Do to Prepare for Iran Deserts?”

Things You Need To Pack for Iran Desert Trip 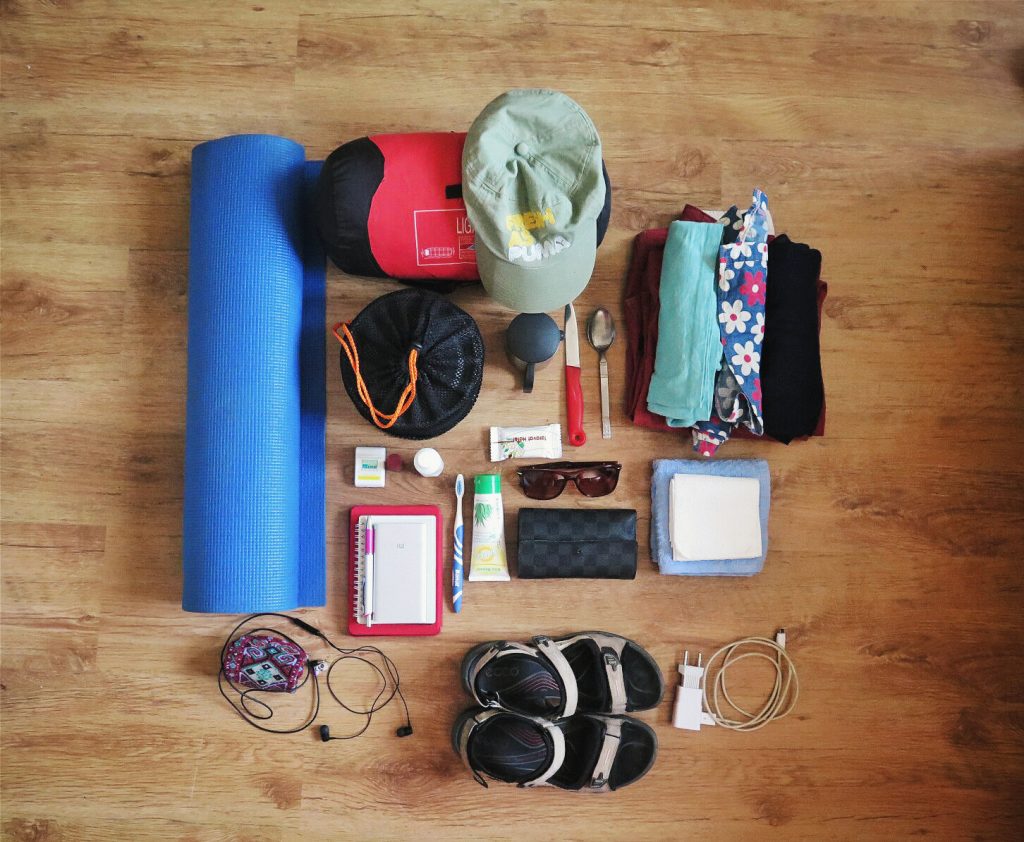 The gear and tools you take with you on a journey to the golden-sand lands of Iran can make the difference between you wanting to extend your visa to spend more time in them and soak up more of the remarkably-satisfying quiet ambiance or it turning to your worst life-hunting nightmare.

To begin with, choose the biggest backpack insight while shopping for the trip. Please don’t fixate on how much room it takes or the back-paining weight, you will come around eventually. Some handy life-saving tools like a compass, a sleeping bag, canned food, a flashlight, a camera, enough rope, a high-capacity power bank, essential medicines, and etc. are the first things you need to bring with you in your oversized backup. 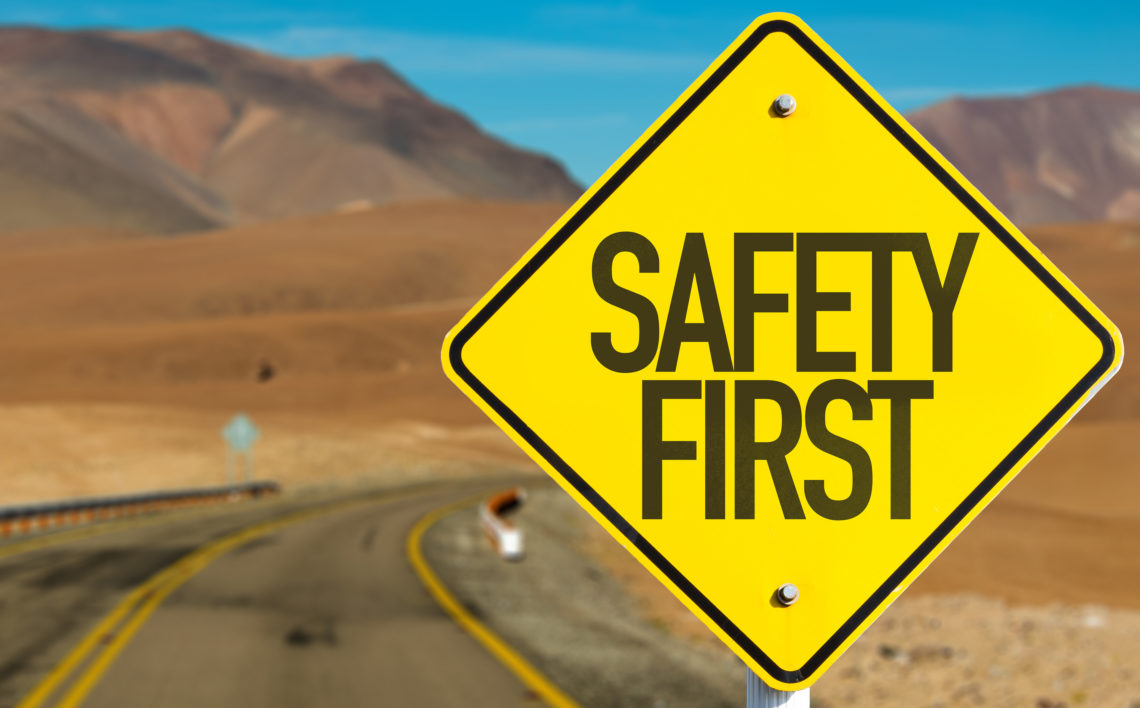 Safety should’ve come first in our guide to Iran deserts, but I forgot; I know, my bad.

Not all Iranian deserts make the cut of want-to-go destinations list due to their unbearable weather conditions (skin-bruising days and bone-freezing) that will end up in casualties if some rookie decides to challenge the nature of them. Fortunately, the love and ancestral connections of Iranian with these lands and far-spread villagers and ancient Persian tribes have distinguished the non-lethal smaller deserts inside the Dasht-e Kavir and Dasht-e Loot for sand-lovers and camel-riders who want to see the golden waves up-close. So, bring on your Sahara sun hats cause it’s going to get hot as we break these two bad boys to hugely-popular and culturally-blessed smaller brown-lands whose names you will definitely hear while staying in Iran. Also, pack two times the water you estimate you’re going to need, just in case.

Also check out: Saftey in Iran

If your cruising through the baked sands in your own car, make sure you’re packing the necessary gears for any emergency flat-tire fix, the highly-unlikely-yet-plausible desert rain that can get your car stick in the mud for hours, GPS tools for directions, and an extra battery and cables if out of nowhere the main battery dies or runs out of juice.

Next on our guide to Iran deserts comes down to personal hygiene.

The blond landscape bewitches anyone to walk on them barefooted, and when they form the wrinkled sandhills, their charm becomes irresistible. Though the sandy ground feels silky smooth and warm under one’s feet, sunburns happen too often and ruin the rest of the trip for the feet-naked roamers.

So far, so good. You’ve set up your tent, haven’t run around too long with your fare unprotected, and you got everything (and even more) for a pleasant and comfortable night-sleep. Don’t let the tranquility of the Kavir’s night completely burn out your consciousness because something wrong still might happen; scorpions, snakes, and other dry-weather pesky insects.

Scorpions have spread the dry areas of Iran, which makes it a severe danger to be careful about in our guide of Iran deserts. Venomous breeds of scorpion lurk around the deserts surrounding Isfahan or Yazd and although no fatalities have been reported in the recent years and any case of stinging was treated in a matter of hours, still, keep an eye out for these thin-skinned predators of the Sahara with their painful stings and extremely powerful pincers.

Another type of creepy-crawlers that you should seriously consider for the night are snakes. Iran hosts the infamous spider-tailed venomous horned snakes, globally-known for the tricks he plays on his pray (birds) before it lashes out for the grip of death. Same as the scorpions, few incidents have happened in the past couple of years were one of these deadly kinds attacked a human being. However, do still keep them on top of the Kavir’s risk and never let your guard down.

We strongly recommend going through a couple of blogs or books on stings and snakebites to be more prepared before stepping foot on the sands, especially barefoot.

Resting peacefully on the arid lands of central Kavir, Kashan has always played an enormous part in the historical fluctuations of Iran and has been called the capital of previous kingdoms often. Words can’t describe the natural phenomena such as the stony underground marvel called Nush Abad, a head-spinning below-surface city consisted of tunnels, far-beyond-its-age underground ventilation systems, houses, Ab Anbars (Reservoirs), dreadful pathways, and dangerous booby traps for the unfortunate enemy soldiers daring to ascend to the tunnels. The astonishments of Kashan don’t end here, though. Bagh-e fin (Fin Garden) a great resemble of worldly-praised Persian Garden, Tepe Sialk Ziggurat with its fire-temple in which the first Zoroastrians paid their respects to Ahoora Mazda, and many more don’t even begin to scratch the surface of what awaits you in this city.

While in Kashan, a quick few-minutes’ drive takes you to the much-neglected “Feiz Abad,” barren land where only experts can tell you the difference between a regular rock and 800-year-old shattered pieces of antique jars, memories of numerous stranded merchant convoys.

As Feiz Abad attracts the history buff and gives them a lot of ground to work on and stories to tell, the close-by Maranjab desert drags in the party people and youngsters down to party and have fun. Not long ago, Maranjab was a sealed-off zone to most of the public, and mainly astronomical peeps bothered to approach the area, set camps, and gaze at the stars. Over the past few years, the reasonably mellow weather, hand-made campsites risen to host guests, and the fact that people can taste a little bit of freedom here, kicked Maranjab up as the most desired arid destination for the Iranian Millennials who always make a lot of sounds, eventually bringing unwanted attention to Maranjab. Today, travel agencies have a tough time getting large crowds through the checkpoints, especially younger tourists, to the well-positioned desert with its gold-shimmering sand dunes, even with a legit permit. This doesn’t concern for smaller outlandish groups, though. They can pay the entry fee and go on a frenzy touristy mode in the Maranjab desert. 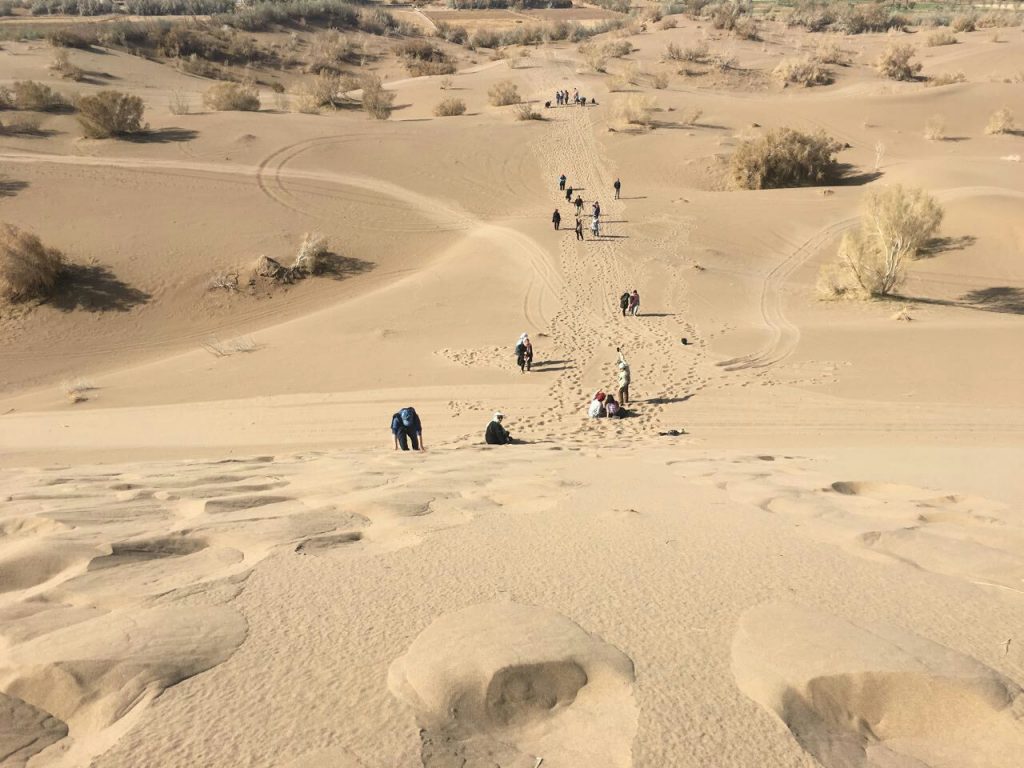 The name “Isfahan” quickly whiplashes the mind to draw-dropping monuments, masterfully-designed mud-brick bridges with their feet in the city-splitting Zayandeh Rud, gorgeous mortar and brick pro-Islam traditional guesthouses and hostels, countless UNESCO world heritage sites, and the power of ancient Persian architecture mixed with Islamic ideology that sends shivers down the spine.

Well, mighty-looking authentic historical sites aren’t the only thing Isfahan has to offer. One of the most popular and highly sought-after central dry zones, called Kavir-e Mesr, lies only a few kilometers outside the city that homes half of the world’s historical hotspots.

Just like Maranjab, Kavir-e Mesr didn’t really strike anyone as a holiday destination not long ago; astronomers too did get to it first with its vast flat and dark hills. This didn’t go on for much longer, either. As people started to swamp Maranjab, it slowly became second-hand news, and sand-lovers began to poke around for a bitter position. During the past few years, Kavir-e Mesr and its tiny adjacent town saw immense growth in the number of tourists, and with it, an undreamt growth in the region’s tourist economy. The recent increase has interrupted the traditional daily lives of desert people and the staleness of its wildlife, especially the sand dunes, though. 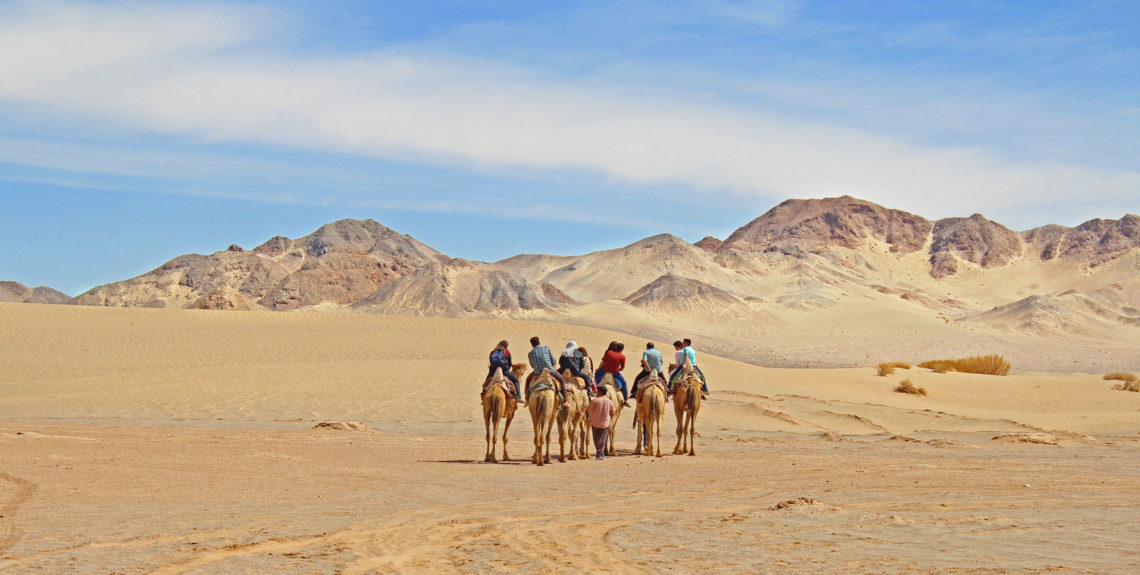 This city has a special space in Iranian hearts, and our “Guide of Iran deserts” because of the “Bafgh” desert. Although the other cities shine gloriously in Iran and under the scorching sun of the subtropical zones, still, they have nothing on Yazd; the most important adobe city in the world can keep up with anything the other historical metropolitans have to throw at it.

With multiple world-class UNESCO enlisted sites, windcatchers on every mud-brick roof, 1000-year-old mosques tiled with colorful pieces and lofty minarets, and a historical texture beating with culture and art at the heart of the city, Yazd leaves incomers in shock and admiration.

One thing the famous “Bafgh” desert certainly does, is to tingle the travelers’ senses even more. Camel riding (Safari) overnight, sleeping in old mud-brick mansions, and other beautiful spots in Bafgh, including its priceless wildlife preservation programs, do put the other Iran deserts to shame. Only 25 minutes away from Yazd, Bafgh will prove worthwhile with locals arranging magical sunset tours for the lowest prices, water basins in the middle of the drylands, regular safari rides in 4*4 cars, and the golden-colored sand waves and the ever-changing shadows of the dunes changing the view of the landscapes. Bafgh may be the nail in the coffin for this part of our “Guide of Iran deserts,” but it’s definitely not the journey through Iran’s main drylands.