Can Americans travel to Iran?

More and more, travelers are seeking a less trodden path. Following the Nuclear Deal, negotiated primarily between Iran’s President Rouhani and President Obama in 2015, adventurous travelers started to see Iran as a viable and safe tourist destination. In the wake of this international trade deal, many travelers (including myself) took the opportunity to visit Iran for the first time. As it were, I was not alone, between 2015 and 2019 Iran saw a steady increase in foreign tourists, with a 50% increase in inbound tourists in 2018.

As an Australian traveler, I was aware that Iran had a protracted history of political tensions with some of Australia’s closest allies, namely the US and the UK. In summer 2016, not knowing what to really expect, I ventured into uncharted Iran. I was able to easily obtain an Iran visa on arrival and whirl-winded my way through an amazing, three-week adventure with no language skills and little familiarity with the culture. It truly was a trip that changed my life and I fiercely recommend an Iranian holiday to anyone! 1stQuest can help you plan your trip – check out the services they offer. 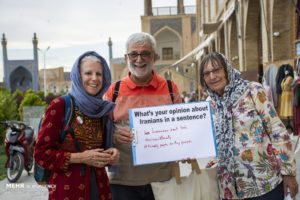 Almost three years on, I now live in Tehran and have met many travelers from all over the world. One who sticks in my mind is Emily, the first American who I met in Iran. Emily was in my Persian language course and had fled US shores following Trump’s election. Jokes aside, I couldn’t wait to ask her about her experience as an American citizen living in Iran. She recounted to me experiences similar to those I had had myself: ease obtaining a visa, unrivaled Iranian hospitality and weight gain due to delicious Iranian pastries.

For information on how to get an Iran visa as an American, check out this article: Iran visa for Canadian, American, and British.

So, is it a good idea for US citizens to travel to Iran? And if so, how’s best to go about planning your trip? Let’s see… 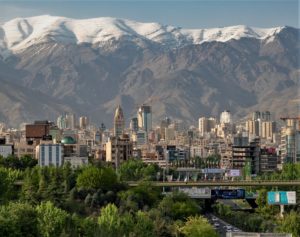 Many buildings in Tehran’s skyline are reminiscent of 1970s American architecture.

Understanding the origin of the animosity between the US and Iran is a useful place to start. Disclaimer – I am neither a historian or a political science major and this my own, oversimplified nutshell, on a way-too complex issue! Here goes.

Over the past 60 years, Iran and the United States of America have shared a checkered history. The 1960s and 70s was a time where Iran and America were close allies, with US companies working in the Iranian oil industry. During this time, the disparity between the standard of living in the oil rich regions and large cities as compared to the regions was woeful. 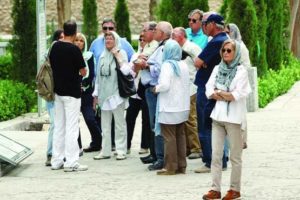 Circumstances came to a head in 1979 and resulted in a revolution. The revolution was a student movement calling for the liberation of the Iranian people and nationalizing Iran’s natural resources. Like most revolutions, Iran’s revolution was bloody and didn’t end up as many of the supporters imagined.

The Shah fled to America and the Islamic mullahs took over government administration. The new government nationalized the oil industry and completely overhauled the previous modus operandi. In the following year’s many politicians, advisers, academics and artists followed the Shah to the US, unable to carry on their lives in Iran. This migration has continued and today, more than one million Iranians currently living in the US.

In the 1980s America began sanctioning Iran. Finally, in 2015, President Obama and President Rouhani brokered a deal; Iran would allow UN inspectors into nuclear facilities and in return, the US would lift the sanctions that were crippling the Iranian economy. Despite Iran’s compliance with the Nuclear Deal, in May 2018 Trump announced he would revoke the deal and reimpose all sanctions, plus more.

There are more complex issues at play such as Shia and Sunni Muslim rifts, Arab state alliances, ongoing tensions between Israel and Iran and other regional factors, however, these do not overtly involve America.

In a word, no. To my surprise, I have found it to be the complete opposite!

Although the history between Iran and the US is fraught, it is unthinkable that American tourists would be met with any local animosity. Iranian people are aware of how their government is portrayed in the mainstream western media; so no one appreciates the sentiment, “the people are not the government” more than the Iranians themselves. 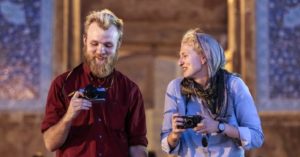 People in Iran continually ask me, “where do you come from?” because they are genuinely interested in having a conversation. When I reply, “Australia”, I usually hear about their uncle who lives in Sydney or that they once saw a kangaroo at a zoo or that they themselves aspire to move to Australia in the future.  I imagine that if the reply was, “America”, the comments in response would follow this same pattern. Read more about this here: Do Iranians hate Americans?

Iranians pride themselves on their hospitality. Persian hospitality is really something else and, in my experience, it is completely unrivaled. I have never experienced generosity and helpfulness to the extent I did on my first trip to Iran. Read more about Iranian hospitality.

Is Iran safe for American travelers?

A big question for travelers is safety. During my time in Iran, I have never felt threatened or unsafe because of my nationality. With newly stationed American warships in the Persian Gulf, the question travelers from the US should be asking themselves is whether they trust their own government!

In an attempt to increase the number of visiting tourists, the Iranian government has recently Iran passport stamp and only issues electronic visas. Having an unmarked passport means travelers should not encounter any future travel problems related to their Iran visit.

Iran is safe for travelers

Due to ongoing regional tensions, travelers should keep themselves informed on current travel warnings (for example near the Afghanistan border) when planning their Iran holiday.

See this article for more information on safety in Iran.

Do you want to travel to Iran cheap and easy? You can choose among reasonably priced ready-made trip packages or customize your own trip with our local travel experts, then book the whole package together and save hundreds. Check out Private Tours.

Why Americans should travel to Iran?

There are countless reasons why you should be planning your trip to Iran! My top three reasons are:

How to apply for an Iran visa as an American

Obtaining a tourist visa for an American citizen will require a bit of forward planning. Contact the [email protected] to talk about how to make an application. They can also increase the chance of your visa application being approved by lodging the application on your behalf.

Tips to plan your trip

Because Iran is not well connected to international banking systems, there are no international ATMs, credit or debit card facilities available for tourists. To avoid carrying large amounts of cash, you can book your domestic flights, hotels, and transfers in advance, online via 1stQuest. 1stQuest also offers travelers an Iranian debit card, which can be charged with USD and converted to the local currency.

For a tailor-made itinerary where you choose your destinations, services, dates, and budgets, check out 1stQuest’s Private Tours. Bundle the services you want to save travel blues and money!

Is it safe for an American to travel to Iran?

Can US citizens go to Iran?

Yes, Americans can travel to Iran but it is obligatory that a tour guide accompany them.

Do US citizens need visa for Iran?

Yes, US citizens need to get an Iran visa, American citizens can easily apply for their Iran visa through 1stQuest.com 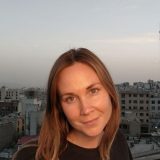