The real gyms of Shiraz, in my opinion, are its extremely happy and hospital people who care more about having fun than working (just my type of people), endless number of famous Persian Gardens which beset this green-life-invaded city, mouth-watering exquisite Persian cousins and salads like the famous Shirazi Salad, luxuriously-beautiful women and prestigious men, and to-die-for delicious traditional Persian deserts and sweets like the well-known Halva Kasih (yellow dens sweet) and Masghati Shirazi (also another kind of conventional sweet). That’s not the case for this piece, however. Today, we’re taking you on an unworldly voyage through the historical gyms and priceless architectural diamonds in Shiraz that have been able to catch the attention of important historical figures in the past and famous present-day personalities; from Alexander of Macedon to the best tourism content creators and Vloggers who all were stunned at the sight of these magnificent structures in Shiraz.

These architectural marvels in Shiraz are solely responsible for the transformation of a tiny, overlooked land in the heart of Fars province to today’s tourist mega-hub welcoming thousands of Iran lovers from all over the globe. Even the fame of two internationally-praised Iranian poets by the name of “Hafez” and “Saadi” can’t keep up in glory compared to these eye-catching sites. So, strap in, you’re about to embark on an adventure of architectural diamonds in Shiraz no elsewhere to be found in the world. 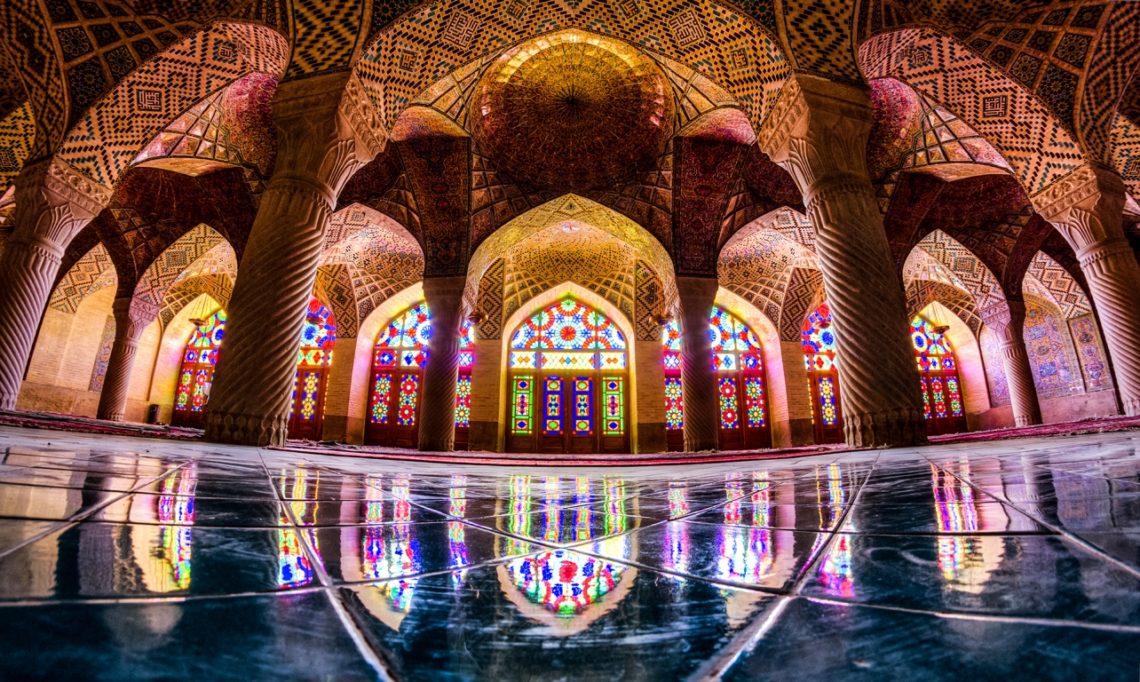 The Pink Mosque in Shiraz

Ah, the tourist-magnet Pink Mosque of Iran; the one which elegantly shines with the pink hue of its masterfully-designed tilework and walls. Labeled as the most beautiful and picturesque mosque in Iran, the Pink Mosque of Shiraz or Nasir Al-Mulk Mosque blesses visitors with its unmatched and beauty, which never fails to drop jaws.

Also check out: 3 days in Shiraz

You’d never expected in a million years that a mosque in Iran, a country of people with strong religious beliefs, can be decorated and designed with such a wide range of colorful tiles and glasses that even Google can’t stop talking about it for pages and pages. While the staggering outer walls, portals, and muqarnas are nothing to speak short of, the real beauty and reason of a Black Friday-like swarm of people and admirers rushing into this mosque lies inside its prayer halls, especially the western wing, where pallets of stained glasses savagely razing the passing light into vivid parchments of dazzling hall-dyeing rays. Sitting down on the fully-encrusted floor with Persian rugs with your back against the inner carved columns dripping of colors like big yummy lollipops, the notion hits you that how mirrors can be transformed to instruments of beauty and class to create such a lively environment. The fact that brilliant architectures gave us one of the most prominent architectural diamonds in Shiraz were truly talented masterminds way ahead of their time. 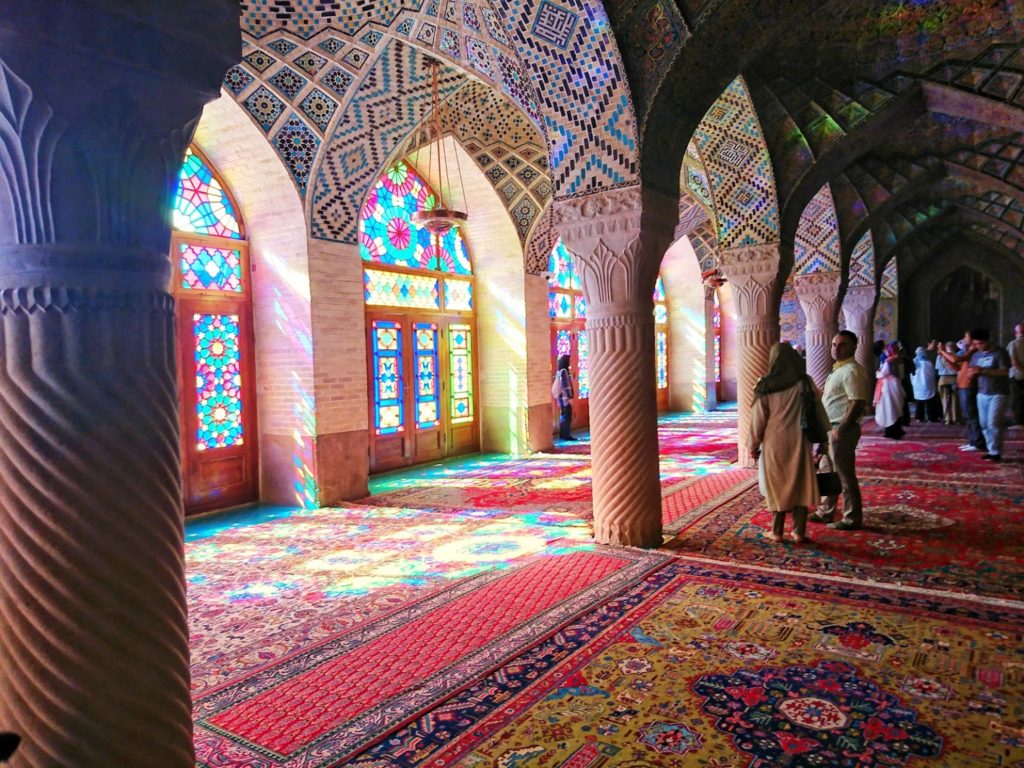 The Pink Mosque is located in the vicinity of the famous Shah Cheragh Mosque and in a culture-dominated district of the city that one way or another, you are bound to pass this region at one point of your travel to Shiraz to find the best historic sites and tourist attractions. 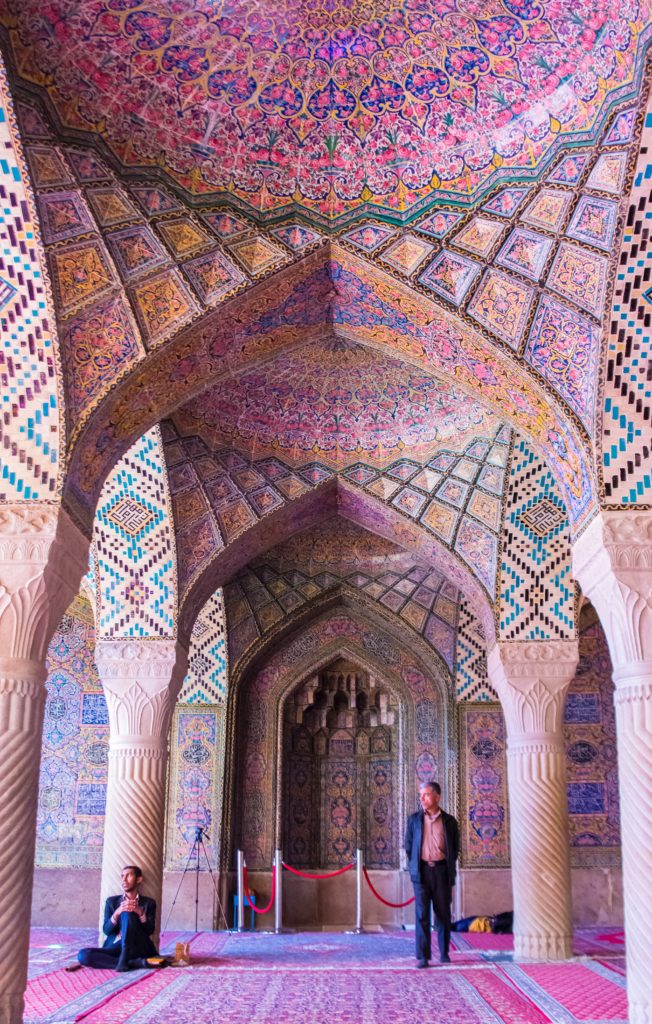 Pink mosque in Shiraz, Photo by Faruk Kaymak on Unsplash

Same as many other tourist spots in Shiraz, the mosque of colors falls right down in the middle of the historical texture of the city, and therefore, finding the best parking spot in main streets can be the beginning of a day-wrecking headache. To counter this and save the day, we recommend using public parking lots such as Esteghlal, Farhang, and Taleqani, which are all close by, and it will take you just 5 minutes to get to your destination on foot. Although, if you’re a peripatetic and public transportation sound like a viable option to you, the Zandie bust station and metro station almost hug the site being only a seven-minutes’ walk away from it; and don’t forget about taxis, they will never leave you standing. Last but not least, ordering a Snapp (Persian Uber Service) is the most convenient and to the most expensive option to go with. 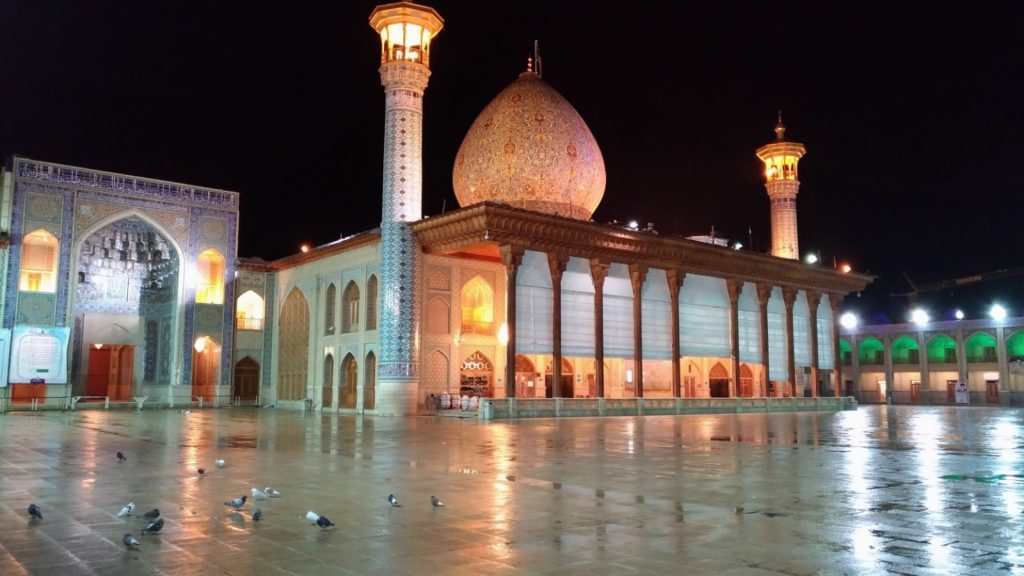 The Thursday-nights ambiguously shining of a mysterious light up in the hills piqued the interest of a rather curious elderly Iranian woman living around the year 960 AD in Shiraz, Iran. Usually, in those times, people wouldn’t dare check this phenomenal due to the religious beliefs but our curious lady gathered her courage and investigated the source of the light to only realize that maybe it could be the long lost resting place of Ahmad Ibn Musa, the murdered brother of Imam Reza, the eighth Shia Imam. Without any hesitation, she tried to inform the authorities but failed to confuse them a few times until finally, the king listened to her, and one night came to her hut to see the light for himself. It was at that night when the screams of “Shah” or “King” and “Cheragh” or “Light” – together creating Shah Cheragh or King of Light – brought the attention of to the mysterious light and consequently, the discovery of the resting place of Ahmad Ibn Musa. This was such a significant dig-up that a mosque, a remembrance tomb, was quickly ordered to be built on top of the unmarked grave, and Shah Cheragh, one of the architectural diamonds in Shiraz, was constructed, at least how the story tells it.

Also check out: the first trip to Shiraz

Shah Cheragh plays the role of a religious beacon for everybody in Shiraz and a spiritual throw-back sanctuary for believers. Here you can really relish and relax in the much-promised divine vibe of an Iranian Mosque that everybody talks about. From the second you step into the premise, the enormous tile-covered courtyard with fountains and smiling people interested in helping you and getting to know you will absolutely take you away. Keep in mind that female visitors must wear a Chador while in the mosque due to religious rules, however, if you forget, there’s no need to worry, they will give you Chadors at the entrance which you can loosely wear over your head and blame the unorthodox looks on you being a tourist with a broad smile.

If you’re lucky enough, you can get into Shah Cheragh at prayers time to see rows of Shia Muslims getting prepared and ready to talk to God by doing the Ablution (cleansing ritual before prayers). Hearing the sweet sound of Azan (Adhan) boosts up the spiritual vibe of the atmosphere and makes you want to sit down on one of the benches or platforms nearby and take in all the culture while enjoying a couple of minutes of unstressed and lazy sightseeing. After shaking off the sluggish feeling, the time has arrived to see the interiors of the mosque.

Inside, the benevolent magic leaves you wondering for hours. Numerous walls and arch completely hidden under shattered pieces of glass elegantly placed beside each other to give birth to a miracle of architecture. Endless small glasses, in combination with the smell of Rosewater, put up a good competition with the feeling of authentic hand-woven Persian rugs under your feet to see which one gets to knock you out of your senses first. That being said, Shah Cheragh hosts not only the devout but a wide range of visitors, from internal tourists to international travelers poised by its architectural design and fine handy-works.

Different inner-city routes lead to this mausoleum, none of which lack ever-present city taxis, so you should have an easy time finding a ride to the picturesque tomb. BRT services in close vicinity of the attraction can also make your excursion to the stress-reliever sanctuary more smooth over almost every hour of the day since they work 24/7. However, in the spirit of not getting lost or not wondering the dark streets late hours, it’s better to ask your guide or host (hotel information). Furthermore, a car park is just a stone throw away from the mausoleum, which also gives you easy access to Nasir al-Mulk mosque as well, so don’t worry about taking a rented or your own car. 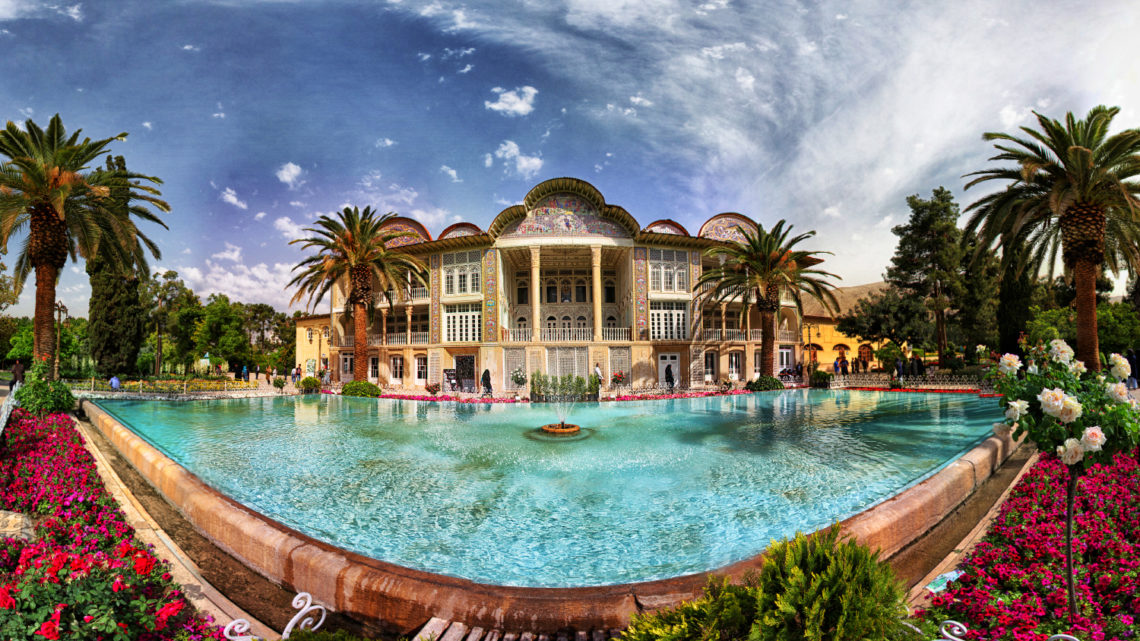 To call a trip to Shiraz a full-wrap, you need to pay a visit to one of its worldly-famous Persian Gardens. And to do so, which garden is more breath-taking and soaked in history than Eram Garden?

It’s believed that upon Arab’s unwelcomed entry to Iran when they first gazed the famous heavenly Persian Gardens, praised them in astonishment and compared them to Paradise, which means heaven. Unfortunately for them, their crusade started a few hundred years late, and they didn’t get the chance to see Eram Garden, the exact resemblance to Paradise in Iran, which was built during the Illkhanid era, some 800 years ago. There are a lot of rumours and mysteries around this unique garden, some say Shaddad, the Arab King, built this one to challenge the promising beauties of heaven, but that seems a farfetched theory since Shaddad himself was a mythical king of an Arabian lost city! But one thing we can say for sure about this bewitching item of architectural diamonds in Shiraz is that it has been described in the Quran, the holy book of Muslims, as the Paradise, waiting for the blessed ones.

Eram Garden has seen powerful rulers and chiefs of different origins sitting in it, make changes on their own terms, and hand it over to the next person. In the year 1823, the chief of the Qashqai tribe took over the settlement and stayed in it for some time until the central Pahlavi government confiscated the site and donated it to Shiraz university, which transformed it into a botanical garden available to the public.

Eram Garden has gone through numerous renovation procedures during its intriguing history with the Zand dynasty topping others in restoring it back to its glory days with just small tweaks to its design. However, what today stands on the northern shores of the Khoshk River in Shiraz embodies the ancient Persians concept of Paradise Gardens, something that mostly is linked to Achaemenid emperors’ luxurious mindset. 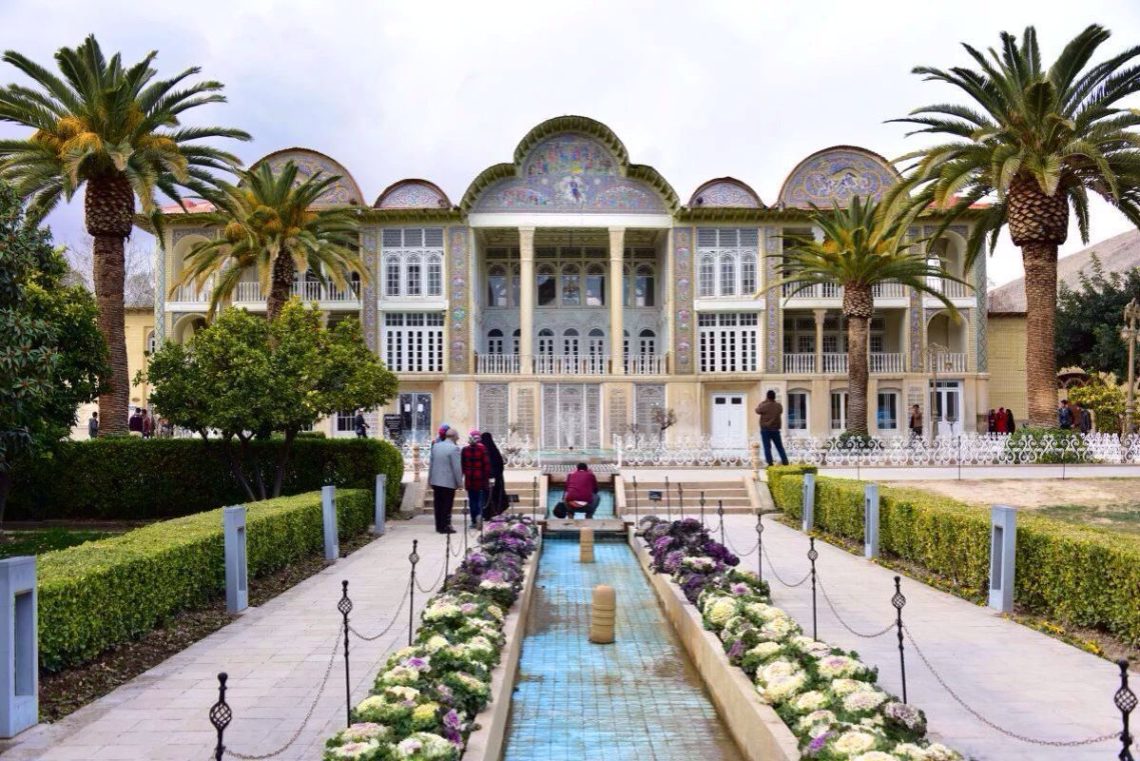 Like its earlier predecessors, Eram Garden blazes with an authenticate and symmetrical design. As you walk pass by the entrance of this small garden, the lively lush vibe oozing from the lofty cypress, persimmon, pine, and sour orange trees – obvious to spot due to the multi-lingual stick-on tags – towering over the central pool with mirroring water brush all your worries away. If you’re lucky enough to visit the garden in spring, then you’re in a treat of seasonal birds singing in the premises while flying from one branch to another in a blissful attempt to break the silence of this mini-plaza. That being said, the never-ending tranquillity and quiet of Eram Garden is the Promised Land for weary tourists and admirers who had an energy-draining day of traveling through Shiraz, one of Iran’s most iconic cities. Usually, the best days to find this piece in the garden are off-season time or colder seasons of the Persian calendar, like Fall, which starts from September to January.

The original mansion was constructed by the order of Mohammad Qoli Khan, chief of Qashqai tribe at the time, who saw to the embellishment of the garden and the building. After the Khan, Naser al-Din Shah, the ruler of the Qajar dynasty, came into possession of the gardens and began the transformation of the main building into a three-story pavilion of eye-catching architectural designs, depictions of legendary figures and angelic damsels who’s untouched and unscathed beauty we are fortunate enough to witness and take pictures of, today.