The only places that you can’t go in Iran by bus is across the deep waters of the Caspian Sea in the north – the Shomal area if you will – and south of Bandar Abbas shores, into the crystal-clear briny water of Persian Gulf, to the strait of Hormuz and famous Iranian Islands and free trade zones like Qeshm and Kish; only because long-tailed sea bridges like Hong Kong-Zhuhai-Macau mega bridge are not yet a thing in Iran and not because the Iranian bus drivers aren’t qualified for the job or their beloved coach-buses aren’t up to the task; trust us when we say they even face a fictional journey into the salty seas riding a long-hauled coach with a “can-do” attitude while repeating the phrase “Inshallah” all the time – meaning if God wills it, it will happen! These guys are professionals and that’s what makes bus rides in Iran an unbelievable example worldwide.

Traveling the country by bus can be at the same time so much fun or too damn frustrating but before even getting into one of these road limousines, we are going to tell you all you need to know about domestic bus tickets in Iran, how to book online bus tickets, where to get them from physically, the prices, and pretty much everything there is that you Iran-virgins need to know.

How to buy domestic bus tickets in Iran 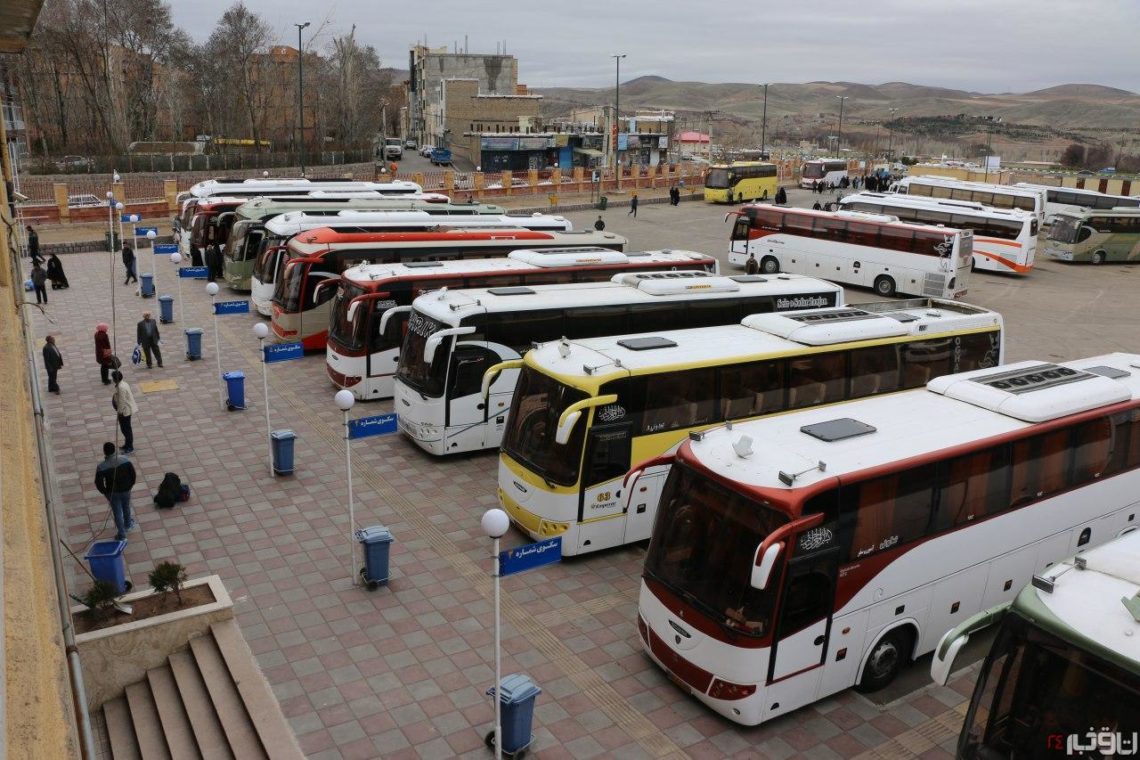 This part only concerns the none-Farsi typists since the process of booking a domestic bus ticket for those who know how to type Farsi on their browsers is pretty straightforward. Otherwise, If you’re exploring the idea of your first bus ride in Iran and you’re a complete stranger to the experience and to the Farsi language, there are a couple of things we think you need to know.

First and foremost, nearly all ordinary Iranian bus-ticket booking websites don’t have a shiny little button on the corner of their page that says “English” that translates the entire page content into the official global language and thus, don’t waste your time there. Websites like 1stQuest.com/bus give you the option to look up coaches and scheduled bus rides in Iran in English with different bus lines’ price lists, featuring detailed information like time of departure, time of arrival, the total amount of travel time, name of the bus stations, etc.

The other way to book a domestic bus ticket in Iran is to physically appear in the terminal and hope that the operator at the counter understands your broken Farsi. Good luck with that.

You may also read: Travel by Bus in Iran

Now if you’re a long-legged individual who can barely fit into any standard-sized chair on public transportation, this part doesn’t really concern you. However, if you’re a regular-sized person who’s feet don’t slide under the front passenger’s chair, then you’d want to read this part carefully. Usually, the main two types of high-quality Iranian coaches take passengers to different parts of the country.

The first type is the “VIP Buses” and the second type’s the “Standard Bus” or “Regular Bus.” The VIP buses are pretty much similar to single-deck coaches in Europe, many of which, according to the tourists in Iran, surpass their European counters parts in technology and comfort. These over-the-road coaches usually can host up to 25 passengers on very comfortable convertible seats that with the slightest push on the buttons can be transformed into half-beds for nighttime or just a quick shut-eye before arriving at the destination, making them the perfect option for weary travelers and tourists or long rides along the bumpy roads that are quite common inside the country. No matter the time or the distance, we strongly recommend booking VIP tickets for your roaming-around the country since they’re super cheap, super comfortable, and available on regular-basis. VIP coaches present the best type of bus rides in Iran.

You may also read: The Best Road Trip in Iran to Take by Bus 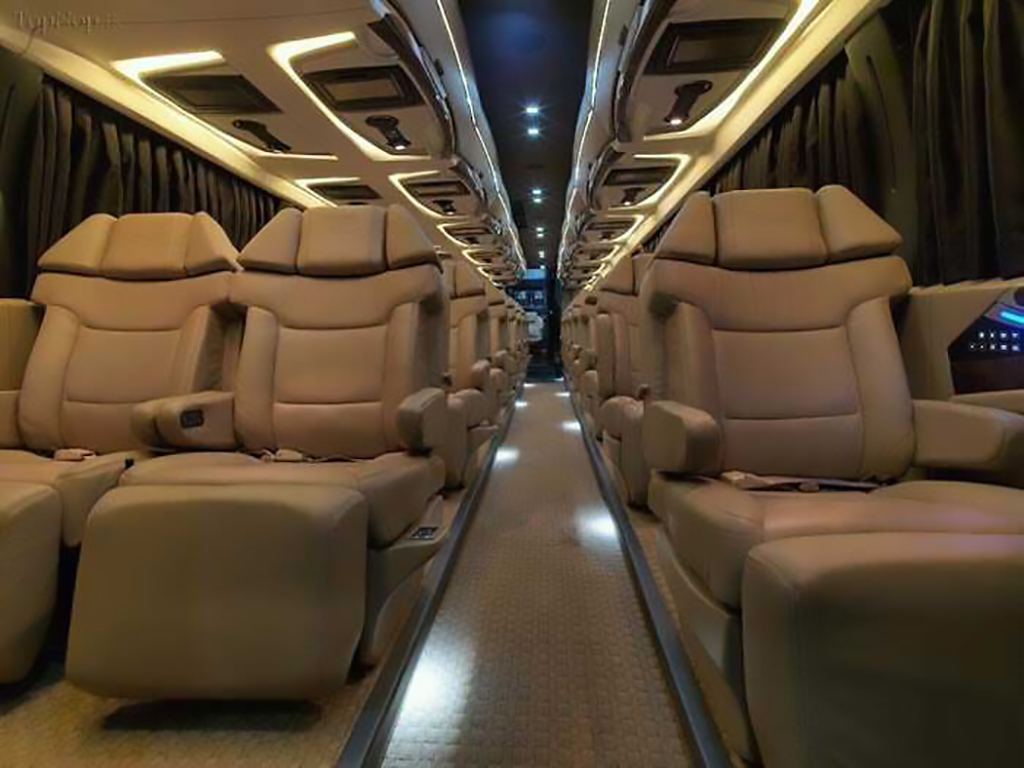 The inside of the Iranian bus cabin

The bus operating companies responsible for these magnificent long-hauled coaches provide impressive sets of services for their passengers. As soon as you climb into one of these amazingly large vehicles you are offered a road trip snack package of cakes, juice, coffee mates, and if you’re lucky enough to book a ticket from a prestigious company, maybe some fruit. For long-distance rides, say from Iran to other countries such as Georgia, the option of a cold meal of Chicken Kebab might be on the table but quite often they are not good enough.

The bus operating companies responsible for these magnificent long-hauled coaches provide impressive sets of services for their passengers. As soon as you climb into one of these amazingly large vehicles, you are offered a road trip snack package of cakes, juice, coffee mates, and if you’re lucky enough to book a ticket from a prestigious company, maybe some fruit. For long-distance rides, say from Iran to other countries such as Georgia, the option of a cold meal of Chicken Kebab might be on the table, but quite often they are not good enough.

The second type of intercity buses in Iran are the standard ones. Cheap as chips, these 44-seated single-decked robust-motored coaches used to be the king of roads in Iran; any bus rides in Iran translated into sitting in one of these coaches’ chairs.

You may also read: Chalus Road; The Ace of Iranian Mountain Roads 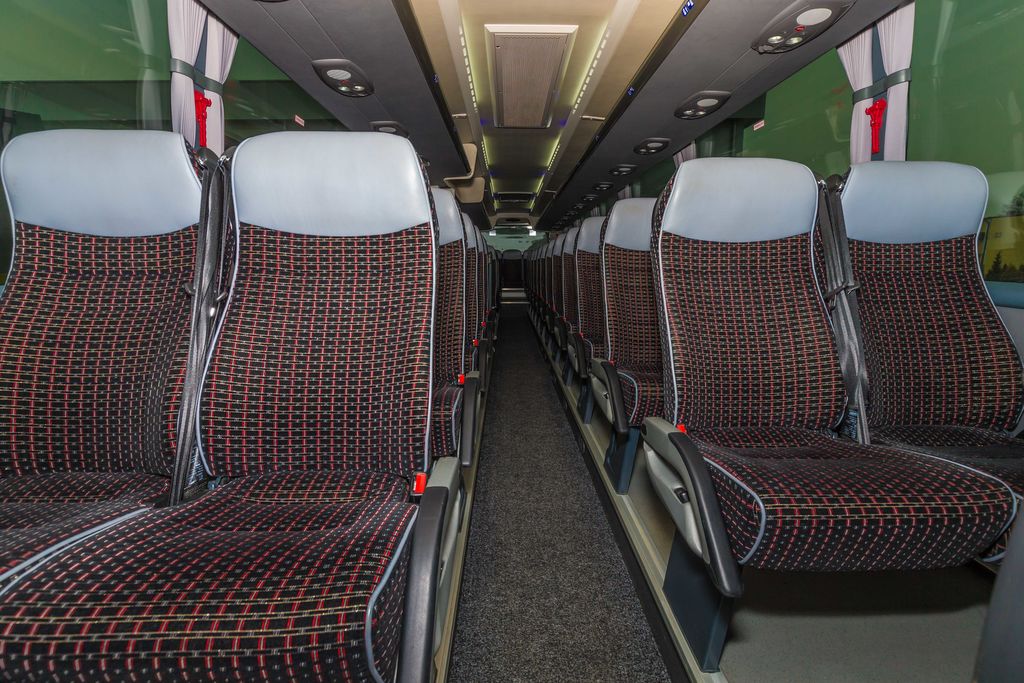 The Standard bus in Iran

Unlike the first-class VIP buses, however, there is a lot less space to jiggle in these buses. The seats stand firm and won’t budge even if you break their back, so booking a ticket to one of these buses means that you’re ready to sleep through the night in a 90-degree chair form. These coaches are best suited for short-distance rides or for destinations that VIP buses don’t usually go to.

Is It Safe to Travel in Iran by Bus?

The death triangle of human errors, road quality, and vehicles has not been so keen on Iranian drivers and, as many of you may know, Iran has the highest rates of road traffic accidents in the world. According to UNICEF statistics, Iran’s current rates are 20 times more than the world average. The “Inshallah” attitude and careless driving of some of the bus drivers – many of them claim to know the roads like the lines on the palm of their hands – doesn’t actually help these ratings either and sometimes news of fatal and heartbreaking road accidents caused by human error break out to the press, putting pressure on Iranian government to aggressively enforce road safety protocols and keep the bus drivers in check; Not the best encouraging record for those interested in going around the country on road trips, right?

That being said, in recent years and after many debuts, Iran traffic police has finally put in place strict regulations and multiple checkpoints along roads across the country to supervise coach drivers, manage travel time, and speed. Speeds are recorded and checked at every checkpoint. These reinforcements have somewhat contained the problem and have brought back safety to the roads. With Iranian bus drivers in check, Iran police traffic has restored order to bus departure timings and have kept them from speeding above 100 km/h, which is the speed limit for coaches on Iranian inter-urban roads. Although, it might still sound a bit much for westerners’ ears who have no idea about what is happening in the domestic roads of Iran, this tiny bit of change has made bus rides in Iran feel considerably safer.

Quality-wise, roads linking cities to each other in Iran are superbly different. A road isn’t considered an actual road in Iran if it isn’t punched with bomb-explosion like craters and it’s a rare opportunity to find a road in Iran that doesn’t have one of these dangerous potholes. However, in the same way of facing the speeding problem, provincial governments address the crisis of road quality in a very stringent manner. For example, some of the roads connecting Tehran to Shomal (Caspian Coastal Provinces) are of high standards, due to the high volume of traffic and transit coming in and going out, so the asphalt and the concrete of these roads are constantly renewed. The lightning of them is too periodically checked, making them efficiently bright all across. Also, police road checkpoints and mobile mechanic units are always close by. Rumble strips, dense-white-colored lines, and large side roads can often be seen implanted in the domestic roads capable of having such safety measurements.

you may also read: Is it Safe to Travel to Iran?

There are lots of beautiful roads in Iran

On the flip side, unfortunately, not the same can be told about desert roads in Iran; such as highways connecting Isfahan to Yazd or Isfahan to Shiraz. These are some pretty bumpy roads and it’s hard to keep your head from rocking horribly and not to feel the pain these bad roads inflict on the body. Don’t be alarmed by the fact that in some parts of these roads your search for light poles ends in disappointment; on the bright side, the gifted darkness, especially in desert areas, grant the passengers an unworldly view of the night sky and pit stops along these roads can come in as unique experiences barely possible in other parts of the country. However, the obnoxious feeling of not seeing the road and how does the bus driver never misses a turn and keeps the bus in line is never a good thing. Yet again, the strict driving laws and the new generation of drivers trained under these regulations have downed the number of accidents caused by human errors and bus rides in Iran is becoming safer by the day. 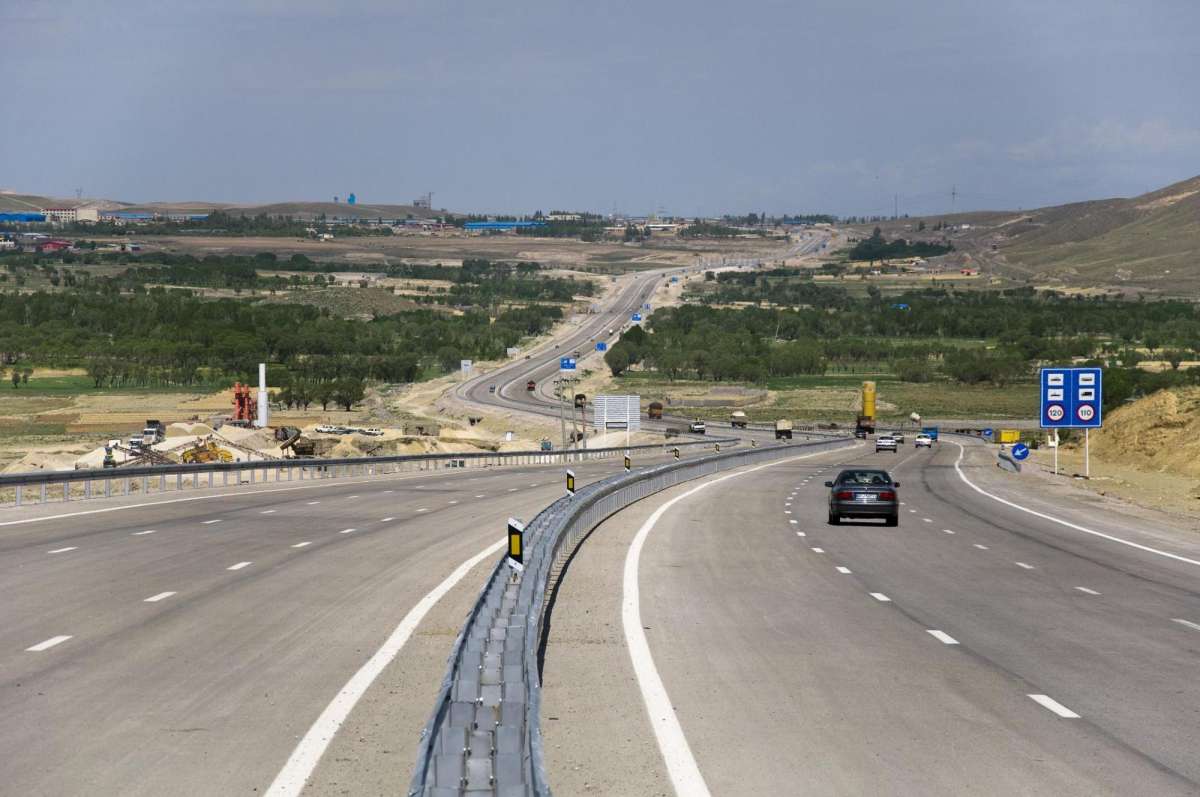 Enjoy a road trip in Iran

Overall, a journey on Iranian intercity highways and roads, like any other unique social experience in the country, needs time to get used to. How this experience turns out totally depends on your mindset before walking up the steps onto the bus and how much you are prepared for fairly bumpy ride.

What are the benefits of booking Iran buses online?

There are some benefits to booking a domestic bus ticket online before embarking on bus rides in Iran.