Our Website detected that you are using Internet Explorer browser that will prevent you from accessing certain features.

We recommend using 1stQuest with one of the follwing browsers:

Item added to your cart

Your selected service has been added to your shopping cart. You can finalize your booking or add more services to your cart.

Other Services you may need

Your booking and related items will be lost.

This site uses cookies to provide you with a great user experience.

Hotel, insurance, bus, and breakfast is on us.

Hotel, insurance, bus, and breakfast is on us.

Kashan is a city in the Isfahan province of Iran. Kashan is the first of the large oases along the Qom-Kerman road which runs along the edge of the central deserts of Iran. Its charm is thus mainly due to the contrast between the parched immensities of the deserts and the greenery of the well-tended oasis. Archeological discoveries in the Sialk Hillocks which lie 4 km (2.5 miles) west of Kashan reveal that this region was one of the primary centers of civilization in pre-historic ages. Hence Kashan dates back to the Elamite period of Iran. The Sialk ziggurat still stands today in the suburbs of Kashan after 7000 years. After well-known Iranian historical cities such as Isfahan and Shiraz, Kashan is a common destination for foreign tourists because of its many historical sites.

Kashan is divided into two parts, mountainous and desert. In the west side, Kashan is cited in the neighbourhood of two of the highest peaks of Karkas chain, Mount Gargash to the southwest of Kashan (the home of Iran national observatory, the largest astronomical telescope of Iran) and Mount Ardehaal in the west of Kashan, also known as “Damavand of Kashan” and the highest peak of Ardehaal mountains (end part of Karkas chain in central Iran).

In the east side of the city, Kashan opens up to the central desert of Iran which the city is famous for. Kashan is also known for Maranjab Desert and Caravanserai located near the namak lake (or salt lake). Today Maranjab and the surrounding Shifting Sands is a popular destination at the weekends. if you are looking for a complete guide about Kashan, check out this article: travel to Kashan

On August 9, 2007, Iran placed the Historical Axis of Fin, Sialk, Kashan on its Tentative List for possible future nomination as a UNESCO World Heritage Site. In 2012 Iran successfully nominated the Fin Garden separately for inscription by UNESCO as a part of its Persian Gardens World Heritage Site. 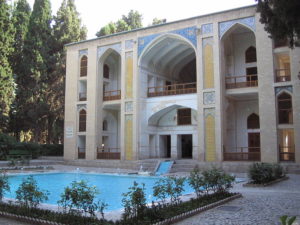 Here is a list of top10 hotels in Kashan : 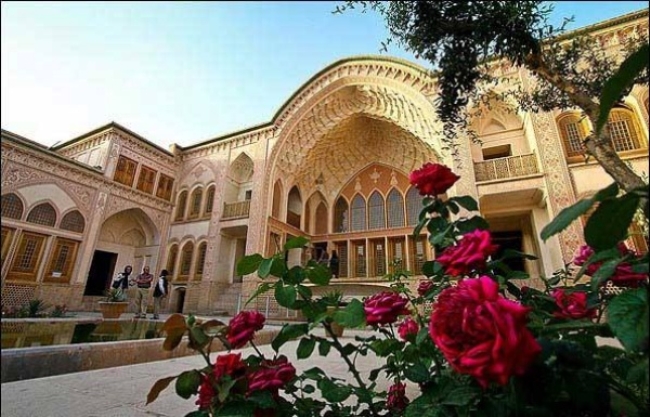 In 1999, in an attempt to restore a part of Kashan’s local culture, Ameriha House was entrusted to a capable, experienced team for restoration. Great care and attention were taken to restore this invaluable house based on its original layout and designs and the restoration project finally finished in 2014.

Now, with fifteen rooms, two restaurants, a coffee shop, and a gallery, Saraye Ameriha Boutique Hotel Kashan offers you a wonderful stay at Kashan, the pearl of the desert. 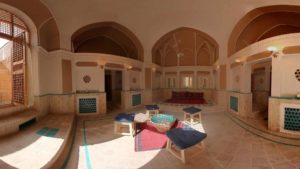 The Iranian House aging more than 250 years, is located in the Kooshk-e-Safi quarter, one of the oldest quarters of Kashan. The 1000m² house, which is constructed on the “flower bed ditch” model, is, in fact, the exterior part of an immense house which lost its interior part and other annexes over time. After seven successive years of strengthening, restoring and remodeling, this house has emerged as one of the rare traditional residences which have been restored according to scientific and technical principles.

In order to preserve the original architecture and flow of life in this edifice, it has been repurposed as a residential complex for tourists in the form of five different residential spaces including the “Upper House”, the “Veiled House”, the “Hidden Chamber”, the “Resting House” and the “Private Chamber” along with other facilities provided in the “Mirror Hall”, the splendid “Parlor”, the “Banquet Hall”, the “Beverage Room” and the “Cistern Cellar” to serve those who have chosen Kashan as a travel destination. 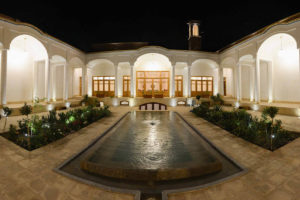 A historic house of hundred years Saraye darbe bagh is situated in the Kashan old district. It was recently restored to its original majesty and converted into a boutique residential hotel. A very traditional breakfast is offered every day with the potential for gussets to reserve luncheons or dinners all of which are prepared in traditional Kashan cuisine. Darbe Bagh guesthouse is the result of nearly two years of painstaking love and care of many artisan Kashan restoration expert. It was built approximately a hundred years ago as the residence for Haj Agha Doroodgar. This house offers you multiple services such as free parking lot, WiFi, airport transportation and multilingual staff are always available to help. 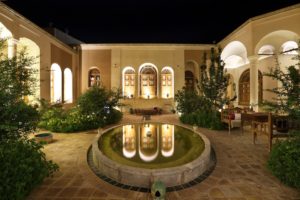 With 250 years of ups and downs in its history, Morshedi house hotel Kashan is one of the historical houses in Kashan, Iran, which has been restored and turned into a traditional hotel. Similar to other historic houses of Kashan, Morshedi House was deteriorating gradually, however, thanks to high potentials of the Iranian tourism industry, there was a change in its fate and it became a magnificent boutique hotel. With its intimate atmosphere, experienced staff, and excellent features, it is not an exaggeration to say that this kind of house is rare or even unique.

The rooms are decorated to resemble aristocratic, historical Iranian houses. Exquisite hand-woven Persian carpets can be seen in every corner. There are toilets and bathrooms in every room and kitchens in every suite. Some of the services and features of Morshedi House include Kashan tours, high-speed Internet, traditional tearooms serving exquisite Kashani herbal tea and sharbat, and proximity to other historical houses. You can experience the real Iranian hospitality in this house.

You can book Adib hotel Kashan easily through 1stQuest. 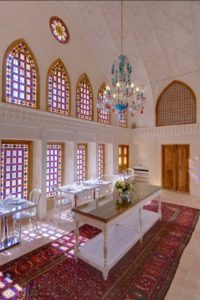 The Manouchehri House is a boutique hotel situated in Kashan’s historic residential neighborhood, a gold mine of traditional Persian architecture and craftsmanship. Nurtured by a passion for design and profound respect for history, this private residence has been brought back to life with the highest standards of historic preservation and the latest in modern amenities.

Eight private guest rooms with unique architectural details surround a peaceful courtyard that features a reflecting pool flanked by gardens bearing local fruit. Guests are welcomed with a refreshment in the elegant lobby outfitted with traditional Iranian furnishings and showcasing an art gallery in the atrium above.

A beautiful dining room serves complimentary breakfast as well as local fare for lunch and dinner. A state-of-the-art subterranean movie theatre converted from the original basement cistern, and wifi Internet service throughout, highlight the harmonious balance of old and new. A spacious textile workshop featuring looms for velvet and brocade weaving support the revival of traditional arts of the region. These rare and precious textiles are available for purchase in the hotel’s gift shop, which presents a multitude of objects from Iranian artisans and craftsmen.

Through consistent dedication and passionate teamwork, the Manouchehri House has become a beacon of cultural and historical restoration and a rare gem in the landscape of luxury accommodations. 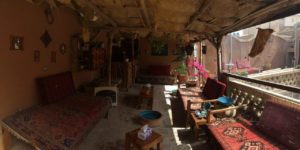 Kamal al Molk house is a traditional Iranian house that is renovated as a guest house at 2014.what is more important for us as Iranians beside doing our job as keeping the hostel clean, organized and comfortable, is making a memorable experience of an Iranian life for a couple of days .we live with our guests like a family .

It has a breakfast buffet where you can enjoy Iranian breakfast.

There is air conditioning in all of the rooms. And there are extra mattresses and blankets in case of necessity. 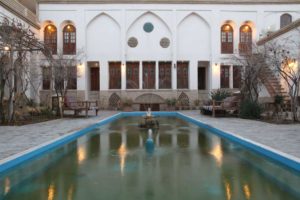 Satisfies the honorable guests with having a suitable environment. Having been located in a historic structure opposite to Aghabozorg mosque, near to Bazaar and touristy area; historical houses ( 10 minutes walk), Ehsan Historical House is registered under 12325 as a national cultural heritage of Iran. The landlord, Haj Mirza Agha Ehsan, had been one of the famous gracious and beneficent, businessmen and landowners of Kashan human.

Ehsan house has a restaurant and teashop to serve delicious Iranian Food; a special menu for the vegetarian and many kinds of drinks. 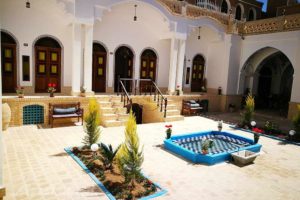 The traditional Amirza Hotel is located in the city of Kashan, in the center of the city and is only a short distance from the historic sites and tourist sites.

Beautiful and traditional space and the welfare of tourists, Proximity to historical monuments and tourism, Family and group tourism service, Free Wi-Fi, Inside Restroom, Self-catering breakfast are all among the hundreds of amenities that Ehsan House provides you with. 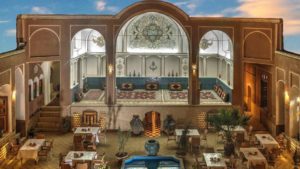 Negin traditional complex is situated in the Old Town section of Kashan and a few steps from centuries old, world famous Kashan Bazar. The complex is a cluster of several tastefully restored and connected Qajar era homes. The main house is a typical aristocratic Persian home with “Shahneshin” and several basements for summer dwelling in typical hot Kashan weather.

The courtyard is fully covered in order to provide refuge from heat, cold and desert dust. Guests enjoy their complementary breakfasts here listening to songbirds and fountain.

Negin hotel can accommodate up to 100 guests. Free wifi is available throughout the complex and rooms are equipped with HVAC, TV, comfortable beds and full western style bathrooms. Bedding is cleaned and changed daily. Hotel is located 5 minutes far from Old Bazar and 20 minutes far from Historical Houses. Private parking is under its multiple camera surveillance on a 24-hour basis. 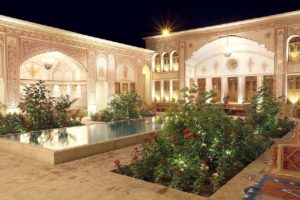 Mahinestan hotel is one of the most luxurious hotels in the heart of Kashan. Having been reconstructed, the building has been converted into a modern place with modern furniture used by travelers visiting this city. This Traditional house has two floors and three yards separated from one another. Every yard has a different name. Internal yard, external yard, and the crew’s yard are the names which are given to them. In this building, every ancient Persian method of construction is utilized, such as summer cloisters and winter cloisters, louvers, basement, vestibules, and alcoves. You can see several parts of this house is exquisitely carved. Mahinestan Rahib has three types of rooms including family rooms, suites, and Double rooms. The rooms amenities are conditioning and minibar, but the hotel amenities and services consist of Free Parking, Meeting Rooms, Concierge, Banquet Room, Room Service, Dry Cleaning, Laundry Service, Multilingual Staff and finally, included breakfast. Pools are an inevitable part of Iranian house buildings.

When is the best time to travel to Kashan?

Spring and Autumn are best times to visit Kashan.

What are the most popular hotels in Kashan?

Although a little expensive the Saraye Ameriha Boutique Hotel is by far the best hotel in Kashan. Morshedi House is a mid-range option and Sayeh Saray consistently gets great reviews from budget travelers.

What are the top things to do in Kashan?

Kashan is Persian design at its best. Visit the Fin Garden and the beautifully restored traditional houses like Tabatabai House. Take a day trip to the picturesque village of Abyaneh.